Injuries pile up as Tigers fall 49-7 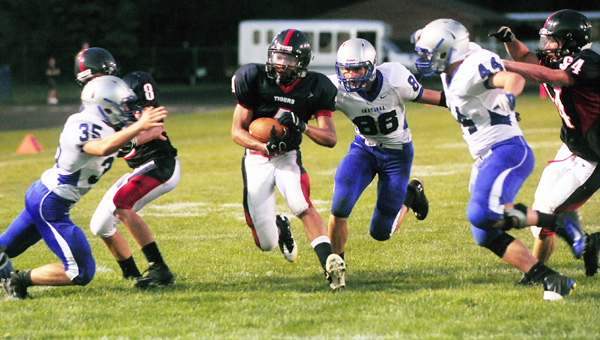 Albert Lea junior running back Makael Lunning (4) scampers toward the end zone Friday during the second quarter of a 49-7 loss to Owatonna. Lunning finished with 29 yards on 11 carries and caught a team-high five passes for 20 yards. -- Andrew Dyrdal

For the second consecutive week, one of the Albert Lea football team’s starters spent the second half in the emergency room rather than on the football field.

Junior quarterback Ethan Abben, who led the Tigers in rushing yards last season, was taken Friday by ambulance to Mayo Clinic Health System in Albert Lea after injuring his foot on a passing play in the first quarter of a 49-7 loss to the Owatonna Huskies at Hammer Field.

Abben was unable to put pressure on his right foot while being helped off the field and was carted to an ambulance after being examined by the training staff. Starting junior Lucas Hansen broke his leg in the season-opener at Waseca.

According to Abben’s dad, Tigers offensive coordinator, Gary Abben, the quarterback has a bruised foot and broken blood vessel, and while medical personnel believed his foot was broken, X-rays revealed it wasn’t. Abben is out indefinitely.

Meanwhile, backup quarterback Derek Burkard led the Tigers, who trailed 42-0 at halftime but kept it close after the break against the Huskies’ non-starters.

After the game, Tigers first-year coach Max Jeffrey used the Huskies as an example on how to build a football program.

“They’re physical and I think that’s one thing we’re going to look to, to build our program,” Jeffrey said. “No. 1 we’ve got to get numbers out, and No. 2 we’ve got to get guys in the weight room because you can see what strength can do.”

That strength held the Tigers to -13 rushing yards in the first half and 37 yards total before the break.

The Tigers’ biggest struggles in the first half came on special teams. Albert Lea failed to receive three kickoffs and gave the Huskies field position deep into their territory.

After the Huskies scored its first touchdown on its second drive less than four minutes into the game, the ensuing kickoff didn’t reach the Tigers’ returner and nobody fielded the ball. With Owatonna barrelling down on the ball, a Tigers player jumped on it but it was knocked away and recovered by the visiting team.

Beginning on the Tigers’ 27-yard line, it took the Huskies four plays to pull ahead 14-0.

Owatonna wasn’t done. The Huskies scored twice more and built a 28-0 lead with 33 seconds remaining in the first quarter. On the following kickoff it was the same story for Albert Lea. The Tigers waited to return the football and fumbled it back to the Huskies. Starting from 30 yards out of the end zone this time, the Huskies scored seven plays later to extend its lead to 35-0 less than two minutes into the second quarter.

Burkard threw an interception on the second play of the ensuing drive, and the Huskies’ Ty Sullivan returned it 17 yards for a touchdown. Then the kickoff troubles continued.

This time no Tigers player touched the ball, and the Huskies recovered the unintentional onside kick at Albert Lea’s 39-yard line but were unable to score.

“Obviously when you give up three balls to them on kickoffs when we were supposed to return the ball that is very demoralizing,” Jeffrey said. “We’re going to learn, and the guys need to understand that the ball is live and they do now. We didn’t yell at the guys, that doesn’t do any good, but in the second half they played with a lot of intensity and fire.”

The Tigers gained a little momentum going into halftime when Brody Sundblad blocked a Huskies punt attempt and gave Albert Lea starting field position at Owatonna’s 30-yard line with less than five minutes remaining in the half.

After losing yards on a rush and throwing an incomplete pass, Burkard connected with Nate Stadheim on third-and-12 for a 27-yard play down to the Huskies’ five-yard line.

Consecutive sacks pushed the Tigers back to the 14 before Burkard threw a screen pass to running back Makael Lunning for 12 yards. Facing fourth-and-goal from the two, Burkard’s pass attempt was batted down at the line of scrimmage, and the Tigers turned the ball over on downs.

Jeffrey said at halftime he told his team to forget about the first half and play hard to every whistle.

“We did,” Jeffrey said. “The guys went to the ball better than last week and that’s important.”

He said the team had good moments that may not have been noticed by the fans.

“They played hard in the second half, there’s no doubt about it,” Jeffrey said. “I don’t care if it’s against their second, third or fourth teams, we’ve just got to improve and we did a little bit in the second half.”

The second half was highlighted by the Tigers’ lone scoring play.

On its second drive, the Tigers moved the ball quickly on the ground. Starting first-and-10 from Albert Lea’s 34-yard line, Lunning rushed for five yards and Burkard added three more. Facing third-and-2, Lunning broke away to midfield on a nine-yard gain.

On first-and-10 from the 50, Burkard dropped back and lofted a pass down the Tigers sideline that fell into the hands of receiver Dylan See-Rockers for a touchdown. The Tigers’ sideline exploded as the home team finally put points on the scoreboard.

“Burkard’s got a good arm,” Jeffrey said. “People don’t realize that. He knows the playbook backward and forward so he just needs experience.”

Jeffrey said in replace of Abben, who according to his father has no timetable for a return, Burkard will take command of the huddle and the team will follow him.

“I’m proud of Burkard because he’s a great kid,” Jeffrey said. “The more reps he gets the more comfortable he’ll become, and he’s going to take us and lead us.”

Burkard finished 9-of-17 passing for 119 yards and an interception.

The Tigers held the Huskies out of the end zone for much of the third quarter and all of the fourth. Senior Cody Haaland’s name was announced most often during the second half as he was responsible for many tackles and the team’s defensive revival. Midway through the third quarter with the Huskies facing first-and-10 from midfield, Haaland notched two tackles near the line of scrimmage before sacking Owatonna’s backup quarterback, Matt Ratzloff, for a five-yard loss, and forcing a punt. He wasn’t shy about expressing emotion after each play made.

The Tigers play again at 7 p.m. Friday against Rochester Century at Hammer Field.