Is his recovery a miracle? 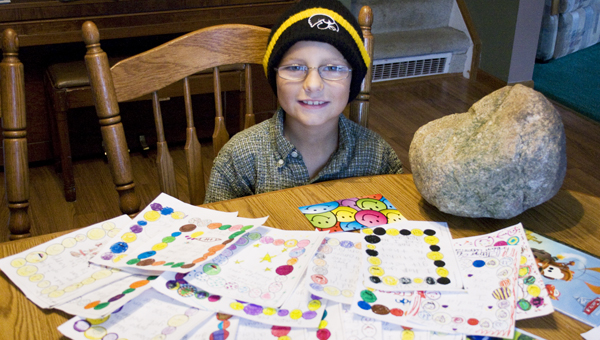 Eight-year-old Kadin Abele sits at the table in his home next to a 35-pound rock that hit him in the head last week. Though Kadin had a skull fracture and had surgery last Tuesday, he is on his way to a speedy recovery. -- Sarah Stultz/ Albert Lea Tribune

LAKE MILLS, Iowa — People are calling him a miracle.

In a matter of a moment, 8-year-old Kadin Abele, son of Paul and Rhonda Abele of rural Lake Mills, went from being a happy-go-lucky, active second-grader at Lake Mills Community School to facing serious, life-altering injuries.

What’s said to be miraculous, however, is that he’s at home and on his way to a full recovery in just a week’s time — with plans to return to school in just a few more days.

“Miracles do happen,” his mother said. “They happen today, not just in the Bible.”

She said her son is living proof of that.

On Sept. 19, Kadin and one of his three brothers were playing outside near the family’s home, where a building had been torn down just a short time earlier.

Though the boys were warned by their parents not to play near the hole where the building once stood, Kadin and his 10-year-old brother, Lane, were curious.

The next thing she knew, Rhonda said Lane had come inside the house while she was making supper and told her that Kadin had been hurt. He told her a rock had fallen on him.

She did not know at that point a 35-pound rock had fallen 15 feet to strike her 62-pound son.

Before she could rush out to see if he was OK, Rhonda saw Kadin walking up to the house holding his head. He told her his hand was numb, and he insisted on going to the doctor.

Raising four boys and at that point not knowing exactly what happened, she said she wasn’t sure how serious the injury was, and she told him they could just wait until the next day.

But he insisted he go that night.

The mother and son went to the emergency room in Mason City, Iowa, during which time her prayers began.

“I kept praying for this lump on his hand to go away, and by the time the doctor came in the bump was gone,” Rhonda said.

But then the doctor informed the family he thought Kadin needed a CT scan.

During that procedure, doctors found a depression in little Kadin’s skull — what was ultimately a serious skull fracture that was putting pressure on his brain.

She immediately called her husband, and Kadin requested his father come to the hospital as well.

She called a friend who initiated a prayer chain, and then other family members and friends, who all began praying in Kadin’s behalf.

“I didn’t know there, but there were prayer chains all over,” Rhonda said. “Our families were praying, we had friends in California, South Dakota praying. It was just unbelievable the people who were praying.”

The doctor ordered surgery for the next day, Sept. 20, in which they had to drill a hole in his skull, take out some of the skull and then put it back in to resolve the issue. That left Kadin with 26 staples in his head.

But that has not stopped the little boy from boosting back up to his old self.

They he is not fully back to normal yet — he still has numbness in his right hand and he has had a little bit of a delay in recouping some of his reading and other capabilities — he is improving every day.

He has received dozens of cards from his classmates and other friends and family, and he will be going back to school on Thursday for a half day.

It’s been a whirlwind week since the incident took place, but Rhonda said she is already planned what to do with that heavy rock that changed her son’s life.

She said they plan to paint it with “Miracles Do Happen” and place it near the front door.

“It needs to remind us that God is so good,” she added. “He is so faithful and miracles do happen today.”

Kadin said he is thankful for the people who have prayed for him and his family. He said he has learned to not climb around in holes anymore — even if they look like fun to explore.