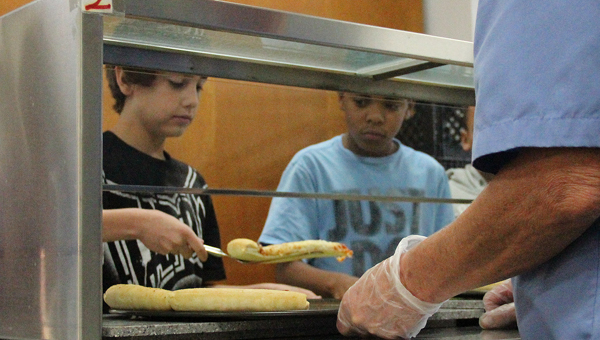 Students scoop up pizza Thursday at Southwest Middle School. Pizza has been very popular at all the schools, according to the district’s food service director, Mary Nelson. -- Kelli Lageson/Albert Lea Tribune

While parents and school staff are always worried about what students are learning — another big concern is what those kids are eating.

The Albert Lea School District is in the middle of transitioning from the old way of doing things to working with Chartwells, a food service management company. The district’s food service director, Mary Nelson, said the change has been hectic but is going well so far.

“It’s a little different at each school,” Nelson said.

Albert Lea High School saw a lot of change with new signage that makes the food area resemble a food court. Nelson said in the future it will become much like a food court with a pizza window, a grill window, a main entree window and a made-to-order sandwich window. Right now there are pre-made cold sandwiches and salads, but that may change in the future.

Southwest Middle School has also seen a lot of change in that students can choose from five different main courses each day. Every day there is a main course (Thursday’s was chicken fajitas), two kinds of pizza (cheese and another, like pepperoni), and two selections of various hot sandwiches like hamburgers, hot ham and cheese or hot dogs. 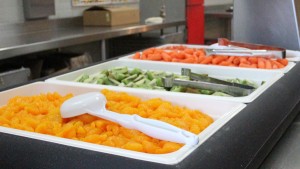 Fresh fruits and vegetables are available for students at Southwest Middle School who choose to eat them.

“They also have a choice of at least one raw vegetable and fruit,” Nelson said.

Southwest is on a five-week menu cycle, and Nelson said she won’t know until the school gets through one or two cycles to know what foods the children aren’t eating that should be phased out.

“We’re still trying to get comfortable with what they’ll eat,” Nelson said.

For both middle and high schools, the homemade pizza has been the most popular choice. One sixth-grader, Morgana Jensen, had a slice of cheese pizza, kiwi slices and chocolate milk on her tray. She said she was glad to have pizza Thursday, because usually she doesn’t like to wait in line for it.

“My favorite fruit is kiwi, and the pizza tastes better than the old school’s,” Jensen said.

Sitting across from her was Abbie Solum, another sixth-grader, who also had the cheese pizza. She said she likes the bigger portions, and when the line for pizza is too long she’ll eat the main entree offering. 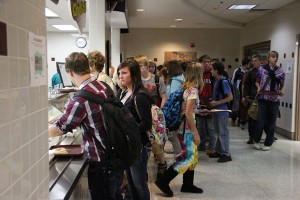 Students fill their trays at Albert Lea High School Thursday. Students and staff alike are getting used to the new food offering since the district has employed Chartwells, a food service management company.

“Sometimes I eat the main dish — the mashed potatoes and chicken nuggets were good,” Solum said.

With the five main courses to pick from, students also were able to serve themselves kiwi slices, mandarin oranges and baby carrots. They also picked from skim chocolate milk, skim milk or 1 percent milk. There were no dessert options, and Nelson said that’s been the case for quite a while with schools trying to be healthier.

Because the transition is not yet complete elementary school students aren’t seeing a big change yet. Right now students have one choice, but Nelson said eventually they’ll have two choices. Nelson also hopes to have an area where students could serve themselves fruits and vegetables, but the schools need to work with existing space and equipment they have.

At the high school, students and staff are getting used to having five grades and three full lunches that are just 25 minutes each. Holly Raben, a senior who eats during B Lunch starting at 11:43 a.m., said the first week it was crowded, but some students have been shifted to C Lunch.

“The pizza’s way better,” Raben said. “The texture is better, and it’s something you’d pick to eat.”

Raben has also eaten the fajitas and said the food overall is better than it was the year before. Choices in the main line this week at the high school included a Thai brown rice bowl, pasta bar, barbecue bowl, fajita bar and chicken nuggets with mashed potatoes. Cashier Winnie Goette said the little Italy wrap and buffalo wings wrap have been popular. 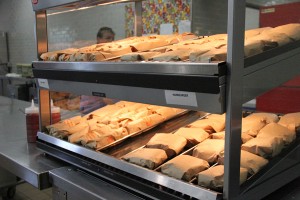 Wrapped hamburgers and hot dogs wait to be picked up by hungry students Thursday at Southwest Middle School. Along with two different kinds of pizza and the main entree, these items were available, for a total of five different choices for students.

Food served at the high school Thurday included spaghetti and meat sauce, breadsticks, applesauce, salad and mixed fruit at the main window. There were at least four kinds of pizza available at that window, and sandwiches were available at the grill. There were turkey wraps, fruits and vegetables and salads available at another window.

The school board in May approved Chartwells as the district’s food service management company. Lori Volz, director of finance and operations for the district, said she hopes the company will help the district stay on top of federal and health regulations while keeping costs down.

“We’re displaying the food in an attractive manner to encourage healthy eating,” Volz said. “There’s so many wonderful choices.”

Federal regulations and guidelines for school lunches require healthier options, which are often more expensive like fresh fruits and vegetables. Because Chartwells is such a large company (with hospital, school and business divisions) Volz said the company has the ability to buy food in bulk and reduce costs.

Workers who were employed before Chartwells came to the district will still be district employees. Replacements for those who retire or resign will be Chartwells employees. Because foods will be prepared in different ways, staffing locations could change. Volz didn’t expect the district to lose any staff members because of the change.