Memorial services for JoAnn Everhard of Albert Lea will be held at 10:30 a.m. Tuesday at Ascension Lutheran Church in Albert Lea. The Rev. Mark Boorsma will officiate. Interment will be at Graceland Cemetery. Visitation will be 5 to 7 p.m. Monday at Bayview/Freeborn Funeral Home and one hour prior to the service at the church. To sign the guestbook go to www.bayviewfuneral.com. 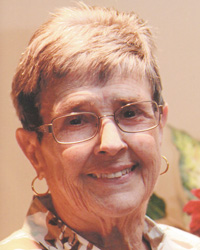 JoAnn died Saturday, Sept. 17, 2011, at the Methodist Hospital in Rochester.

JoAnn E. Everhard was born Dec. 3, 1937, to LeRoy and Gladys (Gjerde) Robinson in Thompson, Iowa. She grew up on a farm near Thompson where she graduated from high school in 1956. JoAnn was united in marriage to LeRoy Everhard on Aug. 30, 1958, at Grant Lutheran Church just south of Thompson. Together they had two children and JoAnn spent many years being a homemaker. She later worked in materials management at the West Clinic. JoAnn was a member of the Eagles, the Red Hat Society and Ascension Lutheran Church where she was very active, especially in Sunday school where she had served as superintendent. She enjoyed sewing and making crafts. Most of all JoAnn enjoyed spending time with her family, especially participating in her grandchildren’s events and activities.

JoAnn was preceded in death by her parents; mother and father-in-law; and brothers-in-law.