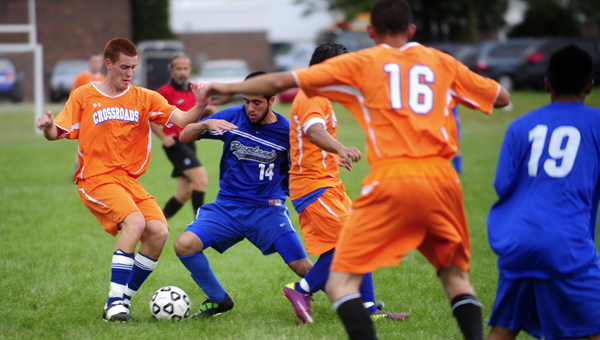 After a 20 minute delay in the 53rd minute of play for lightning, game officials postponed the rest of the soccer match between Riverland Community College and Crossroads College in Albert Lea.

Riverland scored the games lone tally late in the first half during the 32nd minute of play giving the Blue Devils a 1-0 lead at the time of postponement.

“We have a new team and talented players,” said Soner Dogan, Riverland Blue Devils head soccer coach. “We have worked really hard and have a very good midfield that can pass well.”

Before the game can be ruled a complete contest the game officials will report to the league, where a committee will decide if the game should count as a completed game or if they should resume the final 37 minutes and 31 seconds of the game at a later date.

Riverland out shot the Knights 12-1 in the first stanza including the games only score. Pedro Herrera worked the ball inside the box and dribbled across one Crossroads defender before turning and firing the ball across his body towards the Knight’s goal keeper. 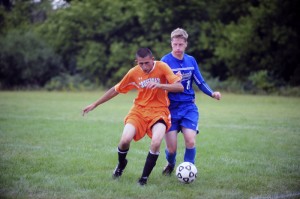 Sam Scheffler tries to beat a Crossroads College defender to the end line for a cross. -- Garrett Wampler/Albert Lea Tribune

Scott Nelson couldn’t make a play on the ball in time as it hit the back of the net.

“Pedro is a very talented and skillful player, but everyone on my team is just as skillful,” Dogan said. “He did what he’s suppose to do.”

The game was a rough and physical match up between the two teams. Crossroads players Patrick Porras and Brian Cherrier received early yellow cards for hard tackles off the ball.

Sam Scheffler made the first challenge against Nelson early in the first stanza. The Blue Devils forward turned on a ball from 18 yards out and fired it at the Knights keeper.

Nelson made a diving save that tipped the ball off of the crossbar.

The Blue Devils worked themselves into another opportunity late in the first half on a corner kick.

Anderson Siqueira played the ball across the pitch only to find the head of Corey Anderson. His header also found the crossbar and the Blue Devils couldn’t capitalize on the opportunity.

“I don’t think we really played the way we wanted to in the first half,” Dogan said. “We wanted to take more shots.”

The second half began the same way as the first, with Riverland controlling most of the possessions before the sky completely opened up and the lightning began causing the delays.

Riverland will return to their home pitch in Austin on Monday to take on Finlandia University in Michigan with the game slated for noon.