Randene Davis, of Glenville, was crowned 2011 Alternate National Shorthorn Lassie in June at the Junior National Shorthorn Show and Conference which was held in Indianapolis, Ind. Davis has represented the Shorthorn breed at shows at the Iowa, Nebraska and Minnesota state fairs and will travel to Louisville, Ky., Denver, Colo., and Fort Worth, Texas, as well as to some of the larger breed sales to represent the Shorthorn cattle breeders and the National Lassie Organization. 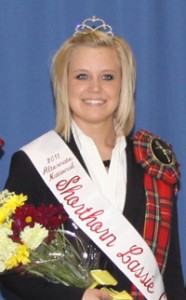 She is the 20-year-old daughter of Lance and Sharon Davis and is currently a junior at Wartburg College in Waverly, Iowa, majoring in elementary education.