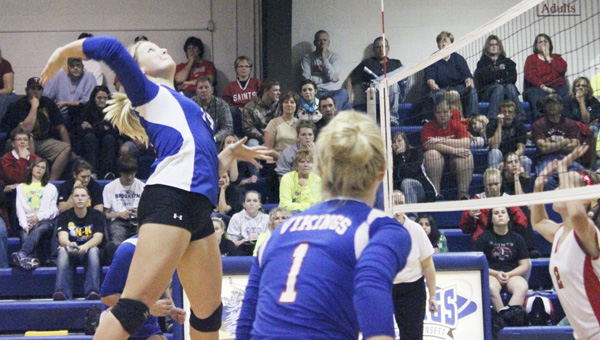 Co-captain Britney Low records one of her eight kills against St. Ansgar. The senior was also 18-20 from the service line with four aces. -- Garrett Wampler/Albert Lea Tribune

NORTHWOOD, Iowa — Northwood-Kensett began their climb back toward a .500 record on Sept. 13, at which time the Vikings were a mere 3-8.

Since then the Vikings (9-10) have won six of their last eight matches including Tuesday’s three-set sweep over St. Ansgar 25-19, 25-21 and 25-21, making them one of the state’s hottest teams entering the tournament season.

The Saints (3-12) pulled out to an early lead in each of the sets only to have their margin squandered by the Vikings’ rallies.

“They have shown me that they never give up,” Vikings third-year head coach Bess Eilertson said. “It doesn’t matter who they’re playing. As long as they come to play, they can play with anybody.”

St. Ansgar pulled out to an early 7-4 lead in the first set behind junior Ally Smith’s abilities serving the ball.

The Vikings responded by pressuring the Saints into mental mistakes and pursuing an eight-point charge to lead the set 20-10. Brittany Low and Courtney Eilertson led the final charge for the Vikings with Low recording the set-winning kill.

“They actually played pretty good,” Eilertson said. “They sometimes struggle with communication issues, and we talk about that a lot in practice. When the girls talk they play very well, but when they don’t talk they struggle.”

St. Ansgar pulled out to another early lead in the second set 13-12, until Low turned up the heat.

The co-captain recorded two kills and an ace en route to the 25-21 set win.

“Brittany Low is definitely a leader for us,” Eilertson said. “She has been since she was a freshman. This is her second year as co-captain.”

With the Saints back out on top in the final set, the Vikings again turned to Low to rally the troops.

Down 4-1, Low stepped to the service line and directed the Vikings to eight straight points, including three service aces. Tessa Bratrud and Courtney Eilertson got back into the mix and help Northwood-Kensett back out to a 22-13 margin.

St. Ansgar rallied to pull the game back to 24-21 before Low closed the door with a powerful spike to end the match 25-21.

“She leads in practice and on the floor and the girls look to her all the time,” Eilertson said. “She takes the ball and runs with it.”

With four contests left on the schedule, the Vikings return to action on Tuesday in Riceville, Iowa.