Funeral services for Merton Chester Munson, 87, of Albert Lea, will be held at 3 p.m. Friday at First Presbyterian Church. The Rev. Dwight Netzer will officiate. Interment will be at Graceland Cemetery. Visitation will be from 5 to 7 p.m. Thursday at Bayview/Freeborn Funeral Home and one hour prior to the service at the church. To sign the guest book, go to www.bayviewfuneral.com. 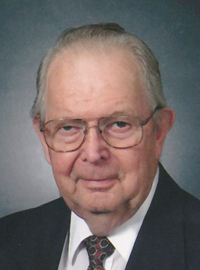 Merton Chester Munson was born on Aug. 9, 1924, to Alfred and Olga Munson on a farm near Hartland. He graduated from New Richland High School. Merton worked for Universal Industry as a salesman. He had also been employed at Coop Creamery as a milk inspector and Marshal Produce in Marshall as a milk inspector. On Aug. 8, 1948, Merton was united in marriage to Lorraine Douglas at First Presbyterian Church. In 1964 Merton and Lorraine purchased the Dairy Queen in Pipestone and were the owners/operators of the business until retiring in 1979. After retiring, Merton and Lorraine returned to the Albert Lea area. Lorraine and Merton enjoyed traveling and spent many winters in Mission, Texas. Other trips included Europe, Canada, Mexico, Alaska and England. Merton was a very active member of the First Presbyterian Churches of Albert Lea and Mission, Texas. Blessed be his memory.