Memorial services for Michael David Carlson, age 69 of Albert Lea, will be held at 2 p.m. Wednesday, Sept. 7, 2011 at Grace Lutheran Church. The Rev. Todd Walsh and Rev. Andrea Myers will officiate. Friends may greet the family an hour prior to the service at the church. Interment will be in Fort Snelling National Cemetery. Military honors will be accorded by area servicemen’s organizations. To sign the guestbook, go to www.bayviewfuneral.com. 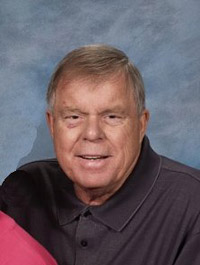 Michael David Carlson was born on Sept. 22, 1941, in Brainerd, the son of John F. and Jessie (Bergner) Carlson. He grew up and went to school in Brainerd. In 1964 Mike joined the U.S. Army, serving in Germany. He was discharged in 1966. Following his return from the service he worked at the Worden Fur Farm in Litchfield. On March 15, 1975, he was united in marriage to Mary Ann Worden in Litchfield. Mike worked at the St. Peter Regional Treatment Center as a cook for 28 years. He was a member of Grace Lutheran Church, the American Legion, and an AA member for 39 years. Mike enjoyed watching the WWF, the Vikings and Twins, doing yard work, going camping, and doing puzzles with his grandchildren. His joy came from watching his grandsons doing their sports activities and cheering them on.

Mike was preceded in death by his parents John and Jessie Carlson, and several brothers and sisters.

In lieu of flowers, memorials are preferred to the Mayo Health System Hospice or the American Legion and VFW Honor Guard.