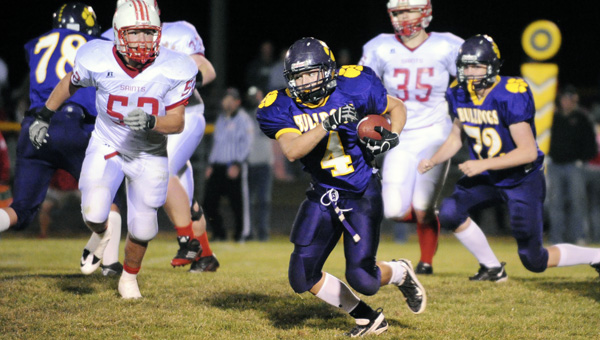 Lake Mills' Nathan Banwart (4) runs with the football Friday during the second quarter of a 37-0 loss to St. Ansgar. -- Andrew Dyrdal

LAKE MILLS, Iowa — The Lake Mills football team played right with St. Ansgar for three quarters Friday. It was the one they didn’t that doomed them.

After a scoreless first, St. Ansgar scored 30 unanswered points during the second quarter of a 37-0 win over the Bulldogs in Lake Mills. The Saints’ Tony Heimer rushed for 142 yards in the first half as St. Ansgar’s offense was unstoppable, scoring four touchdowns and a safety in just over seven minutes.

“St. Ansgar’s an awfully good team but it came down to that second quarter,” Bulldogs coach Bill Byrnes said. “I thought in the first quarter we played extremely well and the second quarter was a nightmare.”

Facing a powerful Saints (4-2) team that has two one-point losses this season, the Bulldogs made a defensive statement in the first quarter.

The Saints opened the game with two plays for 26 yards and moved the ball to the Bulldogs’ 31-yard line. But the Bulldogs limited the Saints to 2 yards on four plays and forced a turnover on downs.

The Bulldogs began its first drive with a 37-yard run by Nathan Banwart but a block in the back penalty negated the run and moved Lake Mills back five yards. It was one of many big plays that was followed by mental mistakes.

“We’re not a good enough team to be able to make some of the mistakes we do,” Byrnes said. 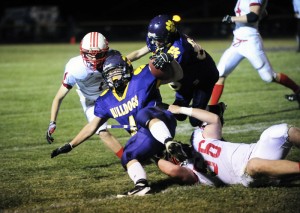 Lake Mills’ Nathan Banwart (4) is tackled Friday during the second quarter of a 37-0 loss to St. Ansgar in Lake Mills. -- Andrew Dyrdal

The Bulldogs drove inside the Saints’ 20-yard line twice during their Homecoming Week game in the second half but turned the ball over on both trips.

Midway through the third quarter, Lake Mills’ Nathan Banwart ran untouched through the secondary for 53 yards before being tackled from behind at the 15-yard line. The Bulldogs rushed for 4 yards on the following two plays but an illegal procedure penalty moved them back to third-and-11 from the 16. Quarterback Calvin Beal was sacked for a loss of 7 yards on the next play, and he threw an incomplete pass on fourth-and-18.

Later in the third, Beal passed to Jon Erickson, who made a leaping catch for 43 yards to the Saints’ 41-yard line. Four consecutive runs by Banwart set up third-and-6 from the 22, before Beal passed to Paul Pins for 7 yards and a first down inside the Saints’ 20. Banwart and Bryan Hengesteg combined to run for another first down, giving the Bulldogs first-and-goal from the 4, but Lake Mills was unable to crack the goal line and Beal threw an interception on fourth-and-goal from the 3.

“I thought our effort was good tonight,” Byrnes said. “Obviously you’ve got to try to get into the end zone but we’re a young team, and with our schedule we don’t have a game that we know we’re playing a team we’re better than.”

The Bulldogs and Saints each had two unproductive possessions in the first quarter before St. Ansgar found the end zone early in the second.

Heimer carried the ball six consecutive times for 37 yards, and John Sievert scored on 9-yard run as the Saints built a 7-0 lead on a 13-play drive. 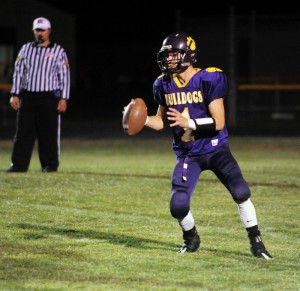 On the ensuing drive, Banwart fumbled on the Bulldogs’ second play, and the Saints scored less than two minutes later on a 7-yard pass from Cael Halfman to Dylan Johnson. Three plays and just 24 seconds later, the Saints sacked Lake Mills’ Beal for 14 yards and a safety, extending its lead to 16-0.

Halfman added another passing touchdown, this time 22 yards to Kyle Hulshizer, on a short, two-play drive, and ran for a 16-yard touchdown with 2:46 remaining in the half.

The Saints added a fifth touchdown with less than 30 seconds remaining in the half but it was negated on an illegal procedure penalty. Hulshizer’s 47-yard field goal attempt as time expired fell short.

Beal finished 4-of-5 passing for 63 yards but was sacked five times.

“We just have a tough time up front when we throw the ball,” Byrnes said. “They get too much pressure on us.”

The Bulldogs, who play one of the toughest districts in the state, fell to 1-5 with the loss and have been shut out four times.

Byrnes said when facing perennial football programs each week, he tell his players to try and improve.

“We can’t do anything about who we’re playing,” Byrnes said. “We’ve just got to worry about what we can do to get better.”

Byrnes said the Bulldogs have made some strides this season but are still too inconsistent on offense.

“We just tell the kids to keep their heads up and come to work every day,” he said. “Hopefully, eventually some things go our way.”

Banwart finished with 23 carries for 85 yards, and Erickson led the Bulldogs with 43 yard receiving.

The Bulldogs play again at 7 p.m. Friday at Nashua-Plainfield.