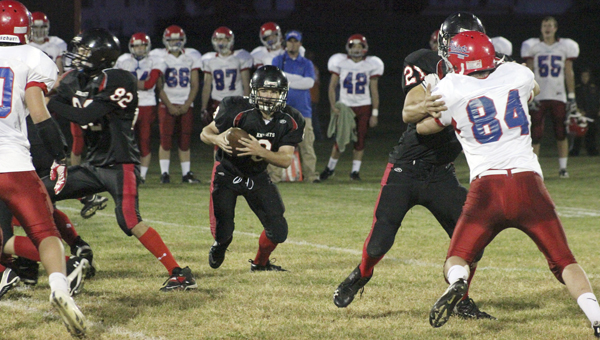 Knights' quarterback Jordon Johnson takes the carry out of an option. Johnson finished with 60 yards rushing on 15 carries and a touchdown. -- Garrett Wampler

Seven penalties, four turnovers and a handful of broken arm tackles helped produce the final lopsided score, a 74-6 loss to the fifth-ranked team in the state, Hills-Beaver Creek.

Quarterback Jordon Johnson scored the Knights’ lone touchdown in the third quarter on a 28-yard run.

Larson tossed two more touchdown passes in the first half before leaving the game. His second trip to the end zone came on a 32-yard reception by Jeff Sandbulte followed by a second hookup with Reese on a 22-yard bomb in the second quarter.

“We played with a lot of heart, a lot of intensity and unfortunately we were outmatched tonight,” Willaert said. “You can’t blame them for that.”

Alden-Conger allowed 430 yards rushing over the course of the game. The Patriots’ junior running back, Dalton Bass, led the team with 176 yards on 11 carries, including touchdown runs of 4, 73 and 44 yards, all in the first half.

Tate Bork picked up where Bass left off in the second half. Bork toted the rock five times for 170 yards and two scores. His end zone scampers came on runs of 49 and 65 yards.

“I think you focus on the good things that you did, which are far and few between,” Willaert said. “When you play a better team, you go out there and do the best you can.”

Johnson got the Knights on the scoreboard in the third quarter. The junior followed sophomore Matt Erickson up the middle on a quarterback draw before breaking to the left and across the pylon on a 28-yard run.

Alden-Conger’s lone score was one of the few positive notes for the Knights. Freshman Ty Lerum and senior Joel Faugstad both were able to recover Patriots’ fumbles during the game.

Willaert pointed out that he was very impressed by the way the younger players on his team stepped up.

“We had a few guys missing tonight and some guys stepping up,” he said. “When your asking freshman to play at a varsity level against a team that is ranked No. 5 in the state, they’re already doing a lot.”

The Knights entered their contest with the Patriots on a high note just one week after snapping an 11-game skid in a 44-20 victory over Truman. They will have to find a way to rekindle that magic next week as they head to Granada-Huntley-East Chain/Martin Luther for a 7 p.m. kickoff.

“We just move on and think about next week,” Willaert said. “We can’t do anything about this game. We just forget about it and move on.”