Memorial services for Norman A. Johnson, 84, will be held at Grace Lutheran Church at 10:30 a.m. Saturday with a time for visiting with the family an hour before. Lunch will follow the service. Private graveside services for his family will occur prior to that time. To sign the guest book, go to www.bayviewfuneral.com. 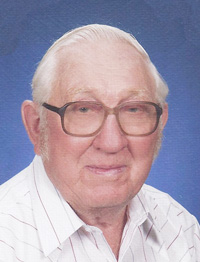 Norman Arnold Johnson Jr. passed away Sept. 25, 2011, at New Richland Care Center where he received such wonderful compassionate care. His wife and family were by his side.

Norman Arnold Johnson Jr. was born in Freeborn County Dec. 25, 1926, to Norman Johnson Sr. and Clara, marrying Irene Wangen on May 3, 1947, at the Oakland Lutheran Church, living for 80 years in Freeborn County. They raised six children north of Clarks Grove and were very involved in the community. Norman and Irene moved to Steele County in 2007 living at Whispering Oak Assisted Living with very kind and dedicated staff. Norman’s mother’s maiden name was also Johnson, therefore Norman had grandfathers John G. Johnson (of Laerdal) and John C. (JC Johnson of Clarks Grove). Norman farmed jointly with his parents, Norman A. Johnson Sr. and Clara, in the Laerdal community until they sold their farm. Norman Sr. then bought and moved onto his parents, John C. and Guri’s homestead northwest of Clarks Grove. Norman Jr. and Irene bought the same farm from Norman Sr. and Clara in 1969. Norman was a dairy farmer from 1950 until 1979 on his family’s century farm, Burr Oak Farms (north of Clarks Grove). Norman also spent many years farming with his son Chris. Norman Jr. attended Hoidal District 26, finishing at Albert Lea High School for grades 9 through 12 in 1943. He went to East Freeborn Lutheran Church until 1950 when he and his wife joined North Freeborn Lutheran Church of rural Clarks Grove. Upon North’s closing, they became members of Grace Lutheran Church in Albert Lea. Norman served for 28 years with the Turtle Creek Watershed; six years on the St. John’s Lutheran Home Board (volunteering there for many years); Clarks Grove Creamery Board six years and the Dairy Association Board. Norman loved to camp, fish and hunt deer, turkey and elk; he enjoyed his horses, refinishing buggies and driving his quarter horse, Babe, for some area weddings, also pulling a cutter in the winter. He was a very good craftsman. He built many backyard “barns” throughout Freeborn County. He was very supportive of his family, helping all of them on many projects. Crane Lake and Branson were favorite vacation spots, along with thrashing shows including being trained as a steam engineer with his son-in-law and grandson. He demonstrated ranch rope making to many at elementary schools, seniors at nursing homes and thrashing shows. He enjoyed sharing his antique Farm all tractors and began “Grandpa’s Tractor Drive” which is now a part of the Shinefest festivities. He will fondly be remembered for his wonderful stories and jokes. He could talk with anyone anywhere and enjoyed making them laugh. We will greatly miss all of these wonderful attributes and are so happy for him now.