WASHINGTON — President Barack Obama is calling for national unity ahead of today’s anniversary of the Sept. 11 attacks and reflecting on a decade that tested America’s character.

“The terrorists who attacked us that September morning are no match for the character of our people, the resilience of our nation or the endurance of our values,” the president said Saturday in his weekly radio and Internet address a day ahead of the 10th anniversary of the attacks. 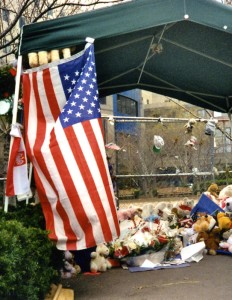 Makeshift memorials like this one were built in New York City in memory of the thousands of people who died in the 9/11 attacks. -- Submitted photo

“We’re doing everything in our power to protect our people,” he said. “And no matter what comes our way, as a resilient nation, we will carry on.”

Intelligence officials have been working around the clock to determine the validity of a new threat of a possible al-Qaida attack on New York or Washington timed to coincide with the anniversary.

Obama, a state senator in Illinois at the time of the attacks, and his wife, Michelle, planned to participate in a service project Saturday afternoon in the Washington area.

The president today was scheduled to visit New York City, Shanksville, Pa., and the Pentagon, the sites where hijacked planes struck 10 years ago. In the evening, he planned to speak at a memorial event at the Kennedy Center in Washington.

In the weekly address, Obama sought a balance between remembering and moving forward. He also tried to summon the feeling of unity that existed after terrorists killed nearly 3,000 people.

“They wanted to deprive us of the unity that defines us as a people. But we will not succumb to division or suspicion,” Obama said. “We are Americans, and we are stronger and safer when we stay true to the values, freedoms and diversity that make us unique among nations.”

Obama thanked American troops who have served in the post-Sept. 11 wars in Iraq and Afghanistan. He praised the military successes that led to advances against al-Qaida and the killing of the group’s leader, Osama bin Laden.

He also reaffirmed his commitment to winding down the conflicts he inherited.

“Yes, we face a determined foe, and make no mistake — they will keep trying to hit us again,” Obama said. “But as we are showing again this weekend, we remain vigilant. We’re doing everything in our power to protect our people.”

“The country was not broken, but rather, it was more united in the days after Sept. 11 than at any time in my lifetime,” Giuliani said. “We displayed heroic spirit in many ways, but perhaps the most heroic was the unity of spirit that we shared as Americans. The American people demonstrated one of the most basic values that we share — our love of freedom and the value we place on individual human life.”

Without mentioning Obama by name, Giuliani also used his address to criticize the administration’s policies, saying that America is safer, but not as safe as it should be.

He condemned plans to remove troops from Iraq and Afghanistan under a set schedule. “American security requires a long-term military presence in the part of the world, where people and organizations are plotting to kill us,” he said.

“Perhaps the most dangerous impulse we’ve developed since Sept. 11 is impatience demonstrated by the calls to put our armed forces on timetables,” Giuliani said.