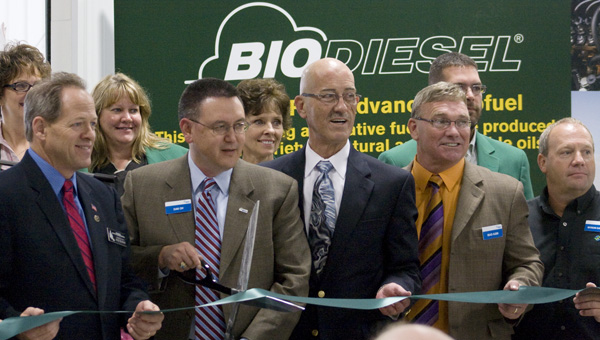 District 27A Rep. Rich Murray, bottom left, REG President Daniel Oh and Albert Lea-Freeborn County Chamber of Commerce Director Randy Kehr, along with chamber ambassadors and others from REG pose for a photo Monday while cutting a ribbon for the reopening of the former SoyMor biodiesel plant. -- Sarah Stultz/Albert Lea Tribune

GLENVILLE — Local and state officials, along with representatives from the biodiesel industry, on Monday celebrated the re-opening of the idled biodiesel plant west of Glenville, which is now owned and operated by Renewable Energy Group of Ames, Iowa.

REG Albert Lea, formerly known as SoyMor Biodiesel, is a 30 million-gallon-per-year biodiesel facility. It opened under the new ownership in August.

“I can’t tell you how excited I am this plant is up and running again,” said District 27A Rep. Rich Murray. 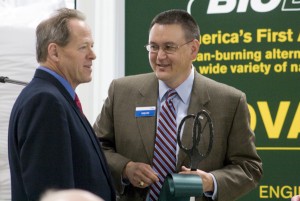 The facility has 20 employees and will not only help the environment, but it will also help farmers, Murray said. He thanked REG officials for choosing to purchase the SoyMor facility.

The plant had been idled since 2008 as a result of high prices for soybean oil. Prior to that time, Renewable Energy Group had been the general contractor and manager for the facility on behalf of its local owners, mostly farmers.

In July, the company announced it had purchased the plant and facility assets with plans to restart production by the end of the summer.

REG has been on track with that projection as it sold its first gallon of biodiesel from the local plant on Aug. 25 to the Trail’s Travel Center truck stop in Albert Lea.

Murray said utilizing biodiesel will help end the reliance on foreign oils and benefit the agriculture industry and the economy in general.

“The more we curb the use of fossil fuels and replace them with renewables the better,” he said.

Albert Lea-Freeborn County Chamber of Commerce Director Randy Kehr said he was celebrating the 20 jobs that were renewed in Freeborn County, calling them green-collar jobs — jobs that pay a livable wage to support a family while also benefiting the environment.

Kehr said the jobs will make a significant contribution not only to the economy of Freeborn County but of Minnesota as well.

“The agriculture industry is critical to Albert Lea and Freeborn County,” he said.

He presented REG President Daniel Oh with a plaque from the chamber, signifying the company’s role as a chamber member.

Oh said he was delighted to celebrate the reopening of the facility and noted he hopes the company will be able to continue to operate the plant and contribute to the economy.

The ceremony took place with about 60 people in attendance.

Also in attendance was state District 24 Sen. Julie Rosen, R-Fairmont, and a representative from the office of U.S. Sen. Amy Klobuchar, DFL-Minneapolis.

Following the ceremony, groups were offered walking tours of the facility.

According to the company, REG is the largest biodiesel producer in the United States. The plant in Glenville brings the REG capacity to more than 212 million gallons per year, at five wholly-owned facilities and one leased facility.

At the time the former SoyMor plant was purchased, REG officials noted that while the SoyMor plant was built as a refined vegetable oil feedstock biodiesel plant, the facility could be upgraded to process a wide variety of lower cost natural fats and oils. That could include cooking oil, inedible corn oil from ethanol production and other materials.

• The facility can manufacture about 30 million gallons of high quality biodiesel each year.

• Renewable Energy Group acquired the facility in July of 2011 with production starting in August.

• The first gallon of REG-9000 biodiesel was sold on Aug. 25 to Trail’s Travel Center in Albert Lea.