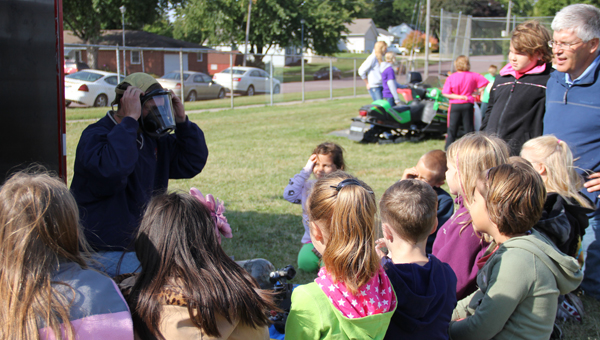 A firefighter shows kids how he’d look with a mask on and asks if he looks scary or trustworthy. -- Kelli Lageson/Albert Lea Tribune 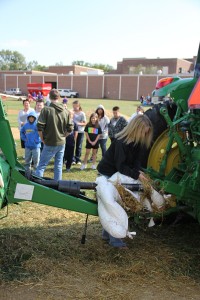 Katie Ovrebo pulls a hay-filled dummy out of the power take off driveshaft Tuesday at a farm safety event at United South Central Schools in Wells.

Dan Dylla, USC’s FFA adviser, said his horticulture class and FFA members were teaching kindergartners through eighth-graders from USC and St. Casimir’s Catholic School about how to be safe around farm equipment. Other local presenters were there as well including ambulance and fire department staff and a local electric company.

“We try to include as much as we can,” Dylla said.

One group, made up of Angel Somnis, Macey Johnson, Joy Wiersma and Stacy Gilsrud, were teaching kids about how to be safe around grain bins and flowing grain.

“For the town kids we teach them not to go play around things that are dangerous,” Somnis said.

The girls said the younger students seemed interested to learn about how equipment can be dangerous. They had a small auger and grain wagon to show how grain gets sucked down into the wagon and comes out the auger.

“We teach them not to play in grain bins or near augers,” Johnson said. 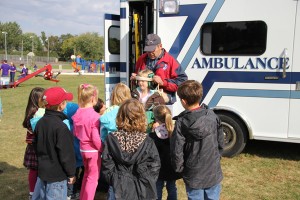 Ambulance staff show young students some of the equipment from the vehicle. The goal of the farm safety event was to help students feel safe around emergency professionals and to learn the dangers of farm equipment.

The girls agreed that telling the younger kids about how dangerous and deadly the equipment can be was worth scaring them to help them know how dangerous it is.

Groups of younger students moved from station to station to learn more about each kind of equipment. Dylla said it was important to have an ambulance and fire truck at the event so smaller children aren’t afraid of the vehicle or crew in case of an emergency.

Students Emily Dahl and Amanda Allis were presenting about ATV and snowmobile safety. They said they were impressed how many younger students knew about using helmets. Students enjoyed seeing the dummy full of hay run over by the four-wheeler.

“Their faces are priceless,” Allis said.

Dahl explained that they had to do research and get statistics to present to the kids. Another group also showed a hay-filled dummy reaching an untimely death. Katie Ovrebo and Ryan Eilertson were explaining the dangers of the power take off driveshaft that supplies power from a tractor to any attachment like a baler. 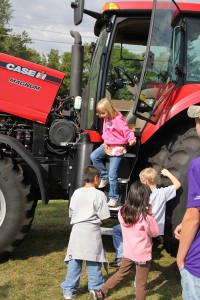 Students each got a chance to climb in and out of a tractor and sit in the driver’s seat at a farm safety event Tuesday at United South Central School in Wells.

“It’s a good experience for kids who have never lived on a farm,” Eilertson said.

They laid a dummy on the power take off and started up the tractor. Kids were surprised to see the dummy ripped apart and entangled in the driveshaft. Younger students were also enjoying a demonstration about safety around electrical wires from John Hutchens of Benco Electric.

Hutchens showed the kids what happens when animals or humans touch the wires by using a hot dog to show how the electricity can burn things. Other stations show how to be safe around augers, tractors, lawnmowers and combines. The event was held outside at USC, and the public was invited to bring children to the event.

Implements were brought to the school from Arnold’s in Alden, Mankato Implement, A&P Service, Hinkley Chevrolet, Benco Electric and Watonwan Farm Service. The program ran in conjunction with the National Farm Safety and Health Week, which started Sunday and ends Saturday. The theme this year was Safety Counts — Your Community Depends On It. 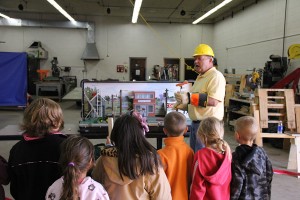 John Hutchens of Benco Electric teaches students about how to be safe around electrical wires. He used a hot dog to demonstrate how electrical wires can burn things that touch them.