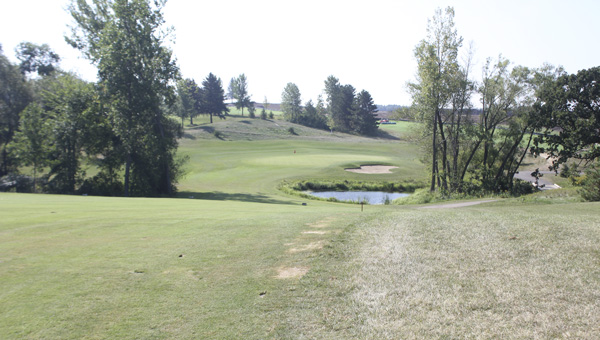 The new approach on Hole 2 at the Owatonna Country Club has a downhill slope toward a pond much like the old Hole 2 had. Hole 2 had been the one motorists could see as they drove by the course. A berm now will limit visibility and reduce noise. -- Tim Engstrom

OWATONNA — The Owatonna Country Club that Albert Lea motorists see as they head north on Interstate 35 through the Minnesota Department of Transportation’s massive construction site to expand U.S. Highway 14 will be changed forever by that project.

The state purchased 11 acres from the private course to make room for the ramp that allows westbound drivers on U.S. Highway 14 to turn north onto Interstate 35. The purchase took land for two holes, so the Owatonna Country Club had to rearrange seven holes to still end up with 18.

Head pro Chris Laughlin said the work took a year and a half but members are excited about the new layout. It’s like getting a 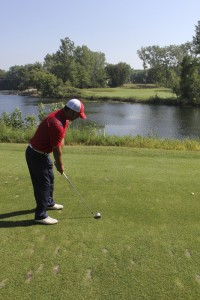 Chris Laughlin, head pro at Owatonna Country Club, prepares to tee off at the new Hole 13, which requires men to shoot over the south end of Lake Kohlmeier. -- Tim Engstrom

“Seven new holes is significant. There was a lot of heavy equipment,” he said. “People are pretty happy with the layout. When it is all said and done, it is great.”

Laughlin said motorists were used to seeing Hole 2 and its scenic pond near the green. Now Hole 2 cuts through an area that used to be brush and grass and has a tall berm on the freeway side to offset the noise of automobile traffic. A new pond has been built near a new green in a new location but still with a downhill approach.

Earth movers can be seen on I-35 and the golf course, though the road crews have bigger ones. On Thursday at the course, a skidloader shaped dirt on a berm designed to block noise from along Hole 3, which will align the new ramp between U.S. 14 and I-35.

The grass on 2 and 3 looks almost like Astroturf; it is so new, lush and bright green.

Holes 4 and 6 will get new tee boxes. Half of holes 14 and 15 are new. The tee box and the first half of the fairway on 14 were formerly woods.

Hole 13 is all new and, from the men’s tee, shoots over the water on the southern end of Lake Kohlmeier. The entire hole was created out of land that had been covered by woods. It now is one of Laughlin’s favorite challenges on the course. 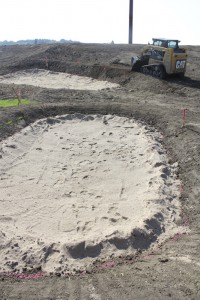 In all, the club has had to move 5,000 cubic yards of soil and has toiled to make sure the new topography will not result in flooding upstream or along the lake. The Straight River runs through the course, which means much of the course is in the floodplain.