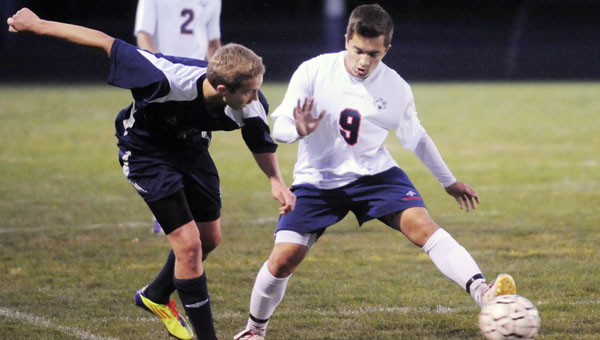 Albert Lea’s Cesar Herrera keeps the ball away from a Panthers player during the first half at Hammer Field. -- Andrew Dyrdal

Rochester Century scored in the 12th minute Thursday at Hammer Field and that’s all it took as the Panthers edged the Albert Lea boys’ soccer team 1-0.

Coming off its first Big Nine Conference win of the season, the Tigers were outshot 17-8 but had its chances to score.

In the 18th minute, Sean Laurie knocked the ball away from a Panthers defenseman and fired an open shot goal from 8 yards out. The goalkeeper dove right and the shot went left but it sailed just above the crossbar.

Six minutes later, Tyler Shaw had an open shot at goal but it was blocked on a diving stop. As the ball rested in front of the goal, Matt Attig charged the net but the ball was kicked away before he could get a foot on it.

“We certainly had our share of the ball,” Tigers coach Elia Romano said. “We just couldn’t turn it into shots.” 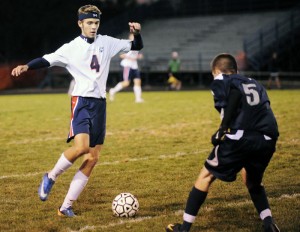 Tigers junior Tyler Shaw (4) works against the Panthers’ Joshua Grove in the first half Thursday at Hammer Field. -- Andrew Dyrdal

Romano said he was pleased with his team’s performance and is happy to see his players having fun despite winning only one of their past six matches.

“We’ve seen just about every situation this year,” Romano said. “Overtime losses, overtime wins, overtime ties, been up two goals and lost, been down two goals and won. We’ve really run the gambit.

“Obviously we want to pick up results, but there’s been very little finger pointing on the team. We’re still willing to work for each other.”