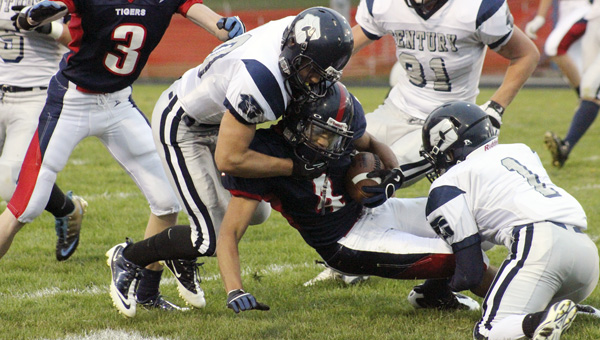 Albert Lea’s Makael Lunning is stopped Friday by a host of Panthers defenders. Lunning carried the ball 15 times for 28 yards in a 41-8 loss to Rochester Century at Hammer FIeld. -- Garrett Wampler

Another attempt to secure the first win of the Max Jeffrey-era of Albert Lea football fell to the wayside on Friday night in a 41-8 loss to Big Nine foe Rochester Century (1-2, 1-1 Big Nine).

For the third straight week, the Tigers’ defense couldn’t stop the run on the gridiron. This time they were shredded by Rochester Century for 331 rushing yards, including 117 yards and two touchdowns on 12 carries by the Panthers’ Alex Crawford.

Albert Lea (0-3, 1-1) did show off some of their potential on defense. The Tigers recovered two Panthers fumbles inside of the five-yard line, including on a goal line stand.

“We made improvements tonight, especially in the first half,” Jeffrey said. “We made a goal line stand down here, and if we don’t make that things go really bad for us.”

Panthers’ senior Brian Christenson carried the ball 11 times for 85 yards including the night’s first score. Christenson took the ball 46 yards up the heart of the Tigers’ defense for the touchdown.

Century fullback Taylor Freund contributed to the Panthers’ cause with a one-yard touchdown run. The senior packed it into the end zone capping off an 11-play drive.

“We can be more physical,” Jeffrey said. “We ran by guys and we didn’t make tackles. There’s no excuse for that.”

Crawford scored his first of two touchdowns of the night on a 37-yard scamper to end the first quarter, putting the Panthers on top 21-0.

After the Tigers’ defense denied Rochester Century another score in the second quarter, Albert Lea manufactured their own 12-play, 79-yard scoring drive.

Tigers senior Dalton Westerlund put the Tigers on the board with a one-yard run past the pylon. Westerlund also took a direct snap into the end zone for the two-point conversion.

Rochester Century went back to work in the second half scoring on a 17-yard run by Christenson in the third quarter .

“We have to tackle better,” Jeffrey said. “We’re running right by guys and they’re running by us. We’ve got to work on that.”

Quarterback Dominick Jacobs floated a ball to Jesse Moeckly for a 19-yard touchdown pass in the fourth quarter and Tyler Prentice topped of the scoring on a two-yard run with 5:29 left in the game.

The status for Tigers starting quarterback Ethan Abben is still uncertain for next week’s game at Rochester John Marshall. Jeffrey said he has a 50 percent chance of returning but said he is leaning toward not playing. Abben injured his foot last week against Owatonna.

The game in Rochester is slated for a 7 p.m. start time.