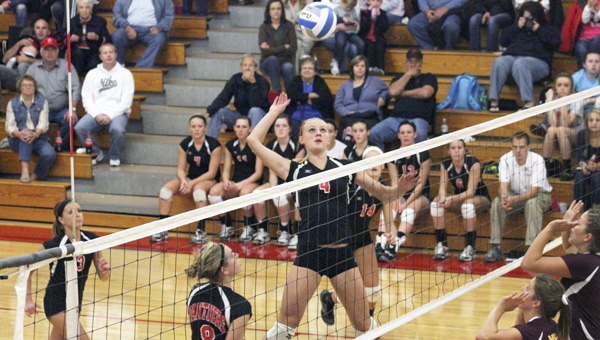 NEW RICHLAND — When two stellar hitters and a great setter team up with an overwhelming, enthusiastic and loud crowd, head coach Joe Kuechenmeister doesn’t have too much to worry about.

Especially when the two hitters are Anna Schlaak and Carlie Wagner, the setter is Noelle Bartness and the crowd is filled with New Richland-Hartland-Ellendale-Geneva Panthers volleyball fans.

Schlaak and Wagner recorded a combined total of 24 kills, and Bartness had 26 assists in the Panther’s 3-0 victory over the Medford Tigers (7-10).

“I feel good about tonight’s match,” Kuechenmeister said. “The girls played with a lot of energy, which in this gym is pretty easy to do because it gets pretty loud.”

After establishing an early 10-5 lead in the first set, the Panthers went on a tear by outscoring their opponent 14-3 on the next 17 set points. Harlee Vokoun and Schlaak lead the team, Vokoun from the service line and Schlaak from the front court.

Schlaak, who recently topped the 1,000 career kills mark, powered her way to 16 more kills on Thursday night, most of them were set up by Bartness, giving her 1,126 for her career total.

“We had very few lapses in passing, which is something that we’ve been working on,” Kuechenmeister said. “It is nice to come out and give one of our soundest victories of the season.”

During the second set, the Tigers were clawing at the Panthers during the early point, until Schlaak opened up the game with her jump serve.

With the game tied at five points a piece, Schlaak rattled off three straight service aces to jump out to the 8-5 lead. Medford would pull the game back within two points at 21-18, but Vokoun was set to serve.

The senior helped the Panthers earn the final four points, including the final set point on an ace.

Wagner took the reigns in the final set of the night. She was pulled from the game after helping establish a 22-13 lead, but was substituted back into the game after the Tigers battled back to 24-21.

On the next point Wagner went high in the air and drilled the ball into the hardwood for the match’s final tally.

“She is a go-to girl. She just knows where she needs to be and when to be there,” Kuechenmeister said. “She is the ultimate competitor. I have no problem saying ‘I need you to do that’ and she’ll get the job done.”

Next up for the Panthers is the Montgomery-Lonsdale Redbirds. They teams are set to square off on Tuesday.

Anna Schlaak topped the 1,000 career kills mark on Sept. 10 in a match against Minnesota Valley Lutheran at the Minnesota State University-Mankato Tournament.

The senior is the first NRHEG athlete to break the 1,000 kill barrier. She has committed to play college volleyball at Concordia University.