Funeral services for Pearl Violetta Thunstedt, 89, of Albert Lea, will be held at 11 a.m. Saturday at Calvary Baptist Church. The Rev. Roger Camerer and the Rev. Mark Miller will officiate. Interment will be at Alden Cemetery. Visitation will be from 4 to 7 p.m. Friday at Bayview/Freeborn Funeral Home and one hour prior to the service at the church. To sign the guest book, go to www.bayviewfuneral.com 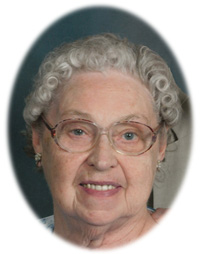 Pearl Violetta Thunstedt was born on Sept. 18, 1921, to Enoch and Eveline (Carlson) Peterson in Alden. She was a native of Alden and a member of the Alden Baptist Church as a young person. Pearl graduated from Alden High School. Pearl worked at Larson Grocery on the north side in Albert Lea during World War II. She was a receptionist at Naeve Hospital and the Freeborn Funeral Home prior to her marriage.

On June 21, 1949, Pearl was united in marriage to Richard Thunstedt in Albert Lea.

They lived in California from 1949 to 1957 when they returned to Alden. She was a member of Calvary Baptist church and taught Sunday school for many years. Pearl also helped her husband as a lay youth leader. Pearl was a devoted Christian and wrote many letters to missionaries around the world. She enjoyed crocheting, sewing, cooking and baking. Pearl will be dearly missed by those who loved her.

Pearl was preceded in death by her parents and brothers: Howard and Richard.

Memorials are suggested to Calvary Baptist Church, Youth for Christ or the Gideon’s International.