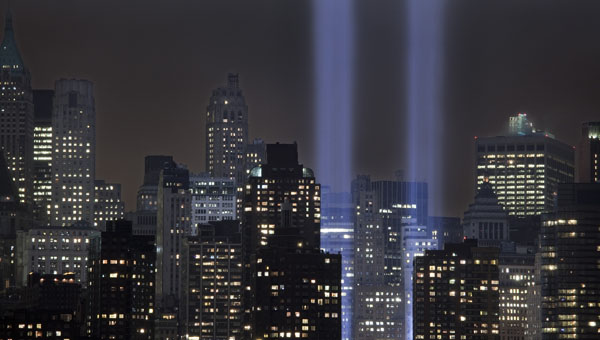 A test of the Tribute in Light rises above lower Manhattan on Tuesday in New York. The memorial, sponsored by the Municipal Art Society, will light the sky on Sunday evening in honor of those who died 10 years before in the terror attacks on the United States. -- Mark Lennihan/AP

Warning sirens will sound and church bells will ring at noon Sunday in Freeborn County as a signal for area residents to stop and remember the 10th anniversary of the 9/11 terrorist attacks.

Piggybacking off of a resolution passed by the U.S. Senate, the Freeborn County Board of Commissioners on Tuesday approved a resolution to join in a national moment of remembrance on Sunday.

At that time, bells and sirens will ring throughout the entire country for a full minute in honor of the people who died during the attacks and to demonstrate the perseverance the American people have shown since that day, according to the resolution.

All emergency responders, law enforcement and firefighters — to the extent possible — will cease all work or other activity to mark the moment in an appropriate manner.

The resolution was approved Tuesday after local officials received word of the U.S. Senate resolution.

Senators asked local officials in cities and counties across the country to participate.

The following are other events taking place in Albert Lea this weekend to mark the 10th anniversary of the 9/11 attacks.

• The third-annual Tribute to 9/11 will be held at the Moose Lodge in Albert Lea, beginning at 5 p.m. Saturday.

Frank Kohl, governor with the local Moose Lodge, said events will start with members of the American Legion Color Guard raising the colors and an invocation.

There will be a dinner of pulled pork, and a street dance featuring Kat Blue will start at 8 p.m.

Kohl said all area fire departments, including those in north Iowa are invited to attend, along with police officers, deputies and first responders.

He issued a special welcome to any family members of deployed Minnesota National Guard soldiers.

The street dance will continue after the tribute and go until midnight.

• Several churches in the area are organizing a special community memorial service at 7 p.m. Sunday at Grace Lutheran Church to give community members a time to remember what the events of that day and to pray for healing for the nation and the world.

Several pastors will share remarks, and a community choir will also perform.

If people have questions, they can call Grace Lutheran Church at 373-6496.

The Albert Lea Tribune will publish a special commemorative edition this Sunday, Sept. 11.