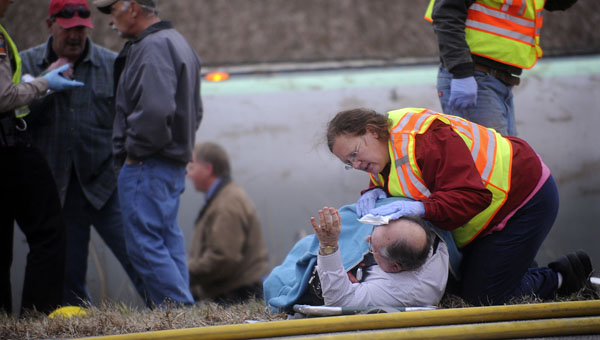 An emergency worker tends to a bus rollover victim on the side of Interstate 90 Nov. 18, 2009, near the side of the Strain Motorcoach Tours bus. -- Brie Cohen/Albert Lea Tribune

The driver of a bus that crashed, killing two people, on Interstate 90 a few miles near Oakland in 2009 had fallen asleep at the wheel, according to the Suk Law Firm.

Seventeen of the 22 passengers of the Nov. 18, 2009, crash reached a settlement of $3.25 million Wednesday afternoon. 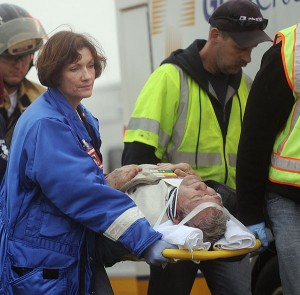 An emergency worker tends to a bus rollover victim on the side of Interstate 90 near the side of the Strain Motorcoach Tours bus rolled over. Two were killed and 21 people were injured.

The civil cases filed against the bus company, Bold Lines Inc., which does business as Strain Tours in Rochester, had been slated for a pretrial hearing in Freeborn County District Court on Oct. 27. The bus company’s insurance agency will pay the settlement.

Jim Suk, lead attorney for the claimants, said the victims feel vindicated by the settlement.

“The clients are very relieved that at least the bus company’s insurance company stepped up to the plate and realized there was a wrong done here,” Suk said. “They were disappointed law enforcement didn’t investigate further before concluding this was a medical emergency.”

The eastbound bus, full of mostly senior citizens, was headed to Rochester, returning from Diamond Jo Casino in Northwood, Iowa, when it veered into the median, avoided oncoming traffic of the westbound lanes and landed on its side in the north ditch. It happened at milepost 172 of I-90. Along with the two fatalities, 21 people were injured in the crash.

Initial reports indicated Elgin resident Edwin Erickson, the bus driver, had lost consciousness because of an aneurysm. During the crash investigation, it was discovered Erickson had been diagnosed with “severe positional sleep apnea” in 2001 at Mayo Clinic but declined treatment.

“A medical expert engaged by the claimants’ lawyers had determined that Erickson had not had a ‘sudden medical emergency,’ but had actually lost control of the bus due to falling asleep at the wheel because of untreated sleep apnea,” according to the Suk Law Firm.

According to a news release from the firm, a reconstruction of the bus crash was done on behalf of the claimants. The claimants’ reconstructionist determined that if Erickson had braked for “as little as 0.7 seconds (long enough to deactivate the cruise control) the bus would have lost speed quickly enough that it would have been stopped or barely moving when it reached the embankment.” 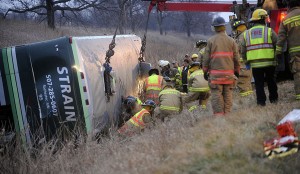 Firefighters from many fire departments around the area attach two tow trucks to the Strain Motorcoach Tours bus that rolled Wednesday on Interstate 90. The bus was going back to Rochester after a Diamond Jo Casino trip.

The release states Erickson was convicted in 2002 of driving while intoxicated. On at least four occasions between 2004 and 2008, Erickson denied, under oath, “habitual, frequent use of alcohol” when renewing his commercial driver’s license. He eventually admitted to drinking about two to three times a week at time of the crash, according to Suk Law Firm. On two occasions while renewing his commercial license, Erickson denied having sleep-related issues but admitted to the sleep issues on two other occasions, the release said.

Suk said he’s not sure if the Freeborn County Attorney’s Office will pursue criminal charges against Erickson, now that there are new revelations.

“My understanding was that they simply closed the book on things,” Suk said about the Freeborn County Attorney’s Office.

Freeborn County Attorney Craig Nelson said he has not been following the civil lawsuit and is unaware of any future criminal charges.

Paul Dahlberg of Patterson Dahlberg, Injury Lawyers, said the victims of the crash were pleased with the settlement.

“We’re pleased that we’re able to reach a resolution that was agreeable for the families,” Dahlberg said. “It’ll never bring those people back or change what the injured people experienced, but it’s always good to resolve the legal pieces of the case.”