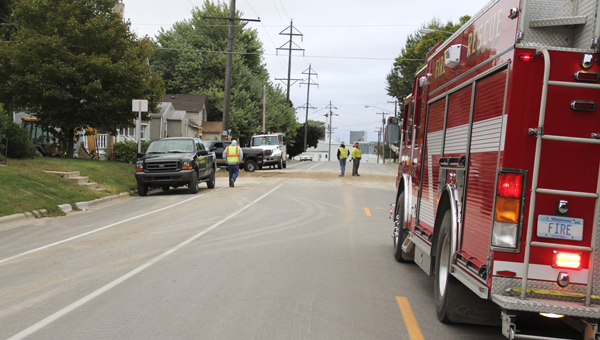 The Albert Lea Fire Department and Police Department responded to a gas leak on Front Street and Lincoln Avenue early Wednesday morning. Homes were evacuated near the leak, and homeowners were told not to turn cars on. -- Kelli Lageson/Albert Lea Tribune

Residents of a dozen homes on the north side of Front Street and the west side of North Lincoln Avenue were evacuated this morning after a reported gas leak, according to police.

Albert Lea Police Lt. J.D. Carlson said crews hit a 6-inch natural gas line at about 7:20 a.m. and had been “working feverously” to cap it. Just before 8:40 a.m., police announced the line had been capped and residents were allowed to return to their homes.

They were still without gas in their homes, however.

The dead-end street had been closed at the intersection of the two streets as work is being completed to replace the sanitary sewer on Lincoln Avenue, north to the dead end.

Contractors with Heselton Construction were contracted for the project, which also involves the replacement of the watermain, curb and gutter and sidewalk, and then paving the surface.

Though the street had already been blocked for the construction, police barricaded the street one block further out, at the intersection of Front Street and First Avenue and then also a block east on Front Street.