The funeral service for Rhoda Joyce Prudoehl, of Albert Lea, will be at 2 p.m. Wednesday at Zion Lutheran Church, Albert Lea. The Rev. Joel Vano will officiate. Visitation will be one hour before the service at the church. 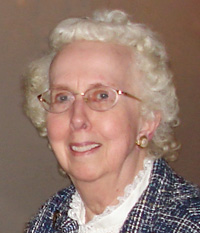 Rhoda was born Jan. 11, 1928, in Blair, Wis., to Ernest and Gena (Johnson) Hanson. She graduated from Blair High School and continued her education at Winona Secretary School. Rhoda has resided in Blair, Wis., Winona, and in 1965 came to Albert Lea. Rhoda married Fredrick Prudoehl in 1951. She was an active member of Zion Lutheran Church. Rhoda enjoyed quilting with the ladies of the church. She worked many years as a bookkeeper for Wallace’s Department Store.

Rhoda enjoyed cooking and quilting. She was an extremely devoted wife, mother and grandmother and was much appreciated.