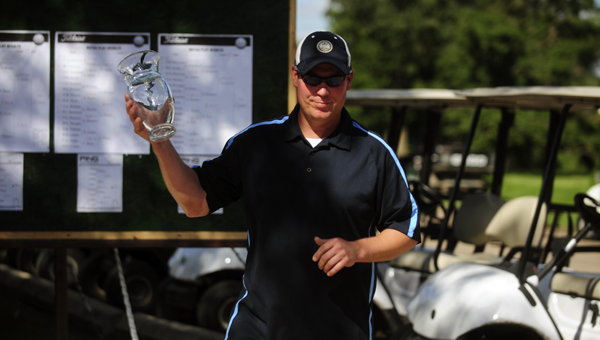 Phil Schmidt won his third Shortstop title in the six years by defeating seventh-seeded Eric VanDyck 7 and 6. His other championships came in 2010 and 2006. -- Garrett Wampler/Albert Lea Tribune

Top-seeded Phil Schmidt made one thing clear Monday on his way to a second consecutive Shortstop Golf Tournament Title.

The road to a Shortstop championship will have to go through Schmidt-ville.

Schmidt won his third title in the six years at Green Lea Golf Course by defeating seventh-seeded Eric VanDyck 7 and 6. His other championships came in 2010 and 2006. 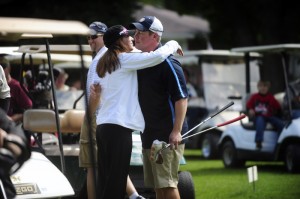 “It feels great,” said Schmidt, after closing out the game on the 12th hole. “It’s the first year my wife got to watch me play. She was excited and I was excited.”

After leading by two holes in championship match, the momentum shifter came on the No. 8. Schmidt’s drive feel just short of the green, while his competitor landed on the putting surface in one shot.

From there VanDyck came up two inches short on a ten foot birdie attempt, and Schmidt, a former professional golfer, chipped-in for birdie from the bottom of the hill to win the hole.

“He hit a great shot, in-fact I think he hit the pin,” Schmidt said. “It’s one of those things in match play it gives you the momentum.”

Schmidt, of Albert Lea, would go on to win five holes in a row to claim the championship. 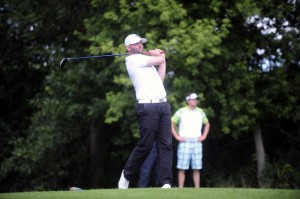 Eric VanDyck punched his ticket to the final match by defeating sixth-seeded Brett Richards earlier in the morning 4 and 3. -- Garrett Wampler/Albert Lea Tribune

VanDyck had kept the game interesting through the first seven holes, with each player winning two holes a piece. The Minneapolis native won the second hole with a birdie and also captured the sixth hole.

Schmidt won the first and the fifth hole on the course.

“I’ve seen Eric play and he beat a lot of really good players on his way to the finals,” Schmidt said. “He didn’t have his best stuff in the last match but he is a heck of a player.”

The runner-up punched his ticket to the final match by defeating sixth-seeded Brett Richards earlier in the morning 4 and 3.

“The first part this morning I played well. I was four under on the back nine,” VanDyck said. “The second match I hit the ball good, but I got a couple of bad breaks here and there and couldn’t make the putts.”

After finishing second in his first year playing in the Shortstop Tournament, he said he will be back to play again next year. 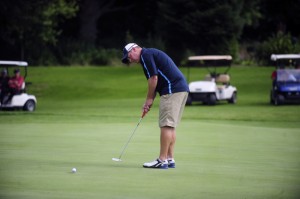 Schmidt’s third championship run came after an opening round defeat of 16th-seeded Tony Richie 5 and 4, and a quarterfinals victory over ninth-seeded Steve Petersen 4 and 3.

Baas kept the match close, but in the end it was Schmidt who was victorious 4 and 3. Setting up his finals victory over VanDyck.

Schmidt and his wife Jennifer are expecting a child in the coming months, which could make it more difficult to three-peat at next years Shortstop Championship.

“They say your golf goes down hill after you have kids,” Schmidt said. “I’ll probably play a little less after we have the baby, but it makes this special.”