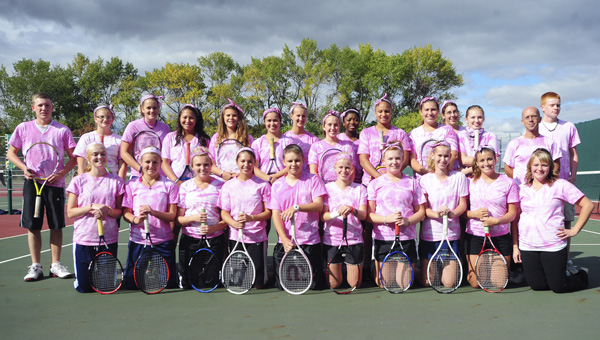 Members of the Albert Lea girls’ tennis team pose for a photo Thursday in their pink tie-dyed T-shirts. -- Andrew Dyrdal

Before each match, two members of the Albert Lea girls’ tennis team provide some sort of inspiration to motivate their teammates.

Sometimes it’s as simple as a bracelet and a snack.

The entire team of around 20 players, and coaches Wayne Prudoehl and Holly Bohlen, wore pink, tie-dyed T-shirts with pink ribbons tied in their shoelaces.

According to Ellis, the girls made their shirts together as a team-bonding experience at the beginning of the school year. Some players wore tie-dyed bandannas, too.

The match between Albert Lea and Winona at Albert Lea High School was played with pink Wilson Hope all-court tennis balls, and 1 percent of the sale of the product was donated to breast cancer research.