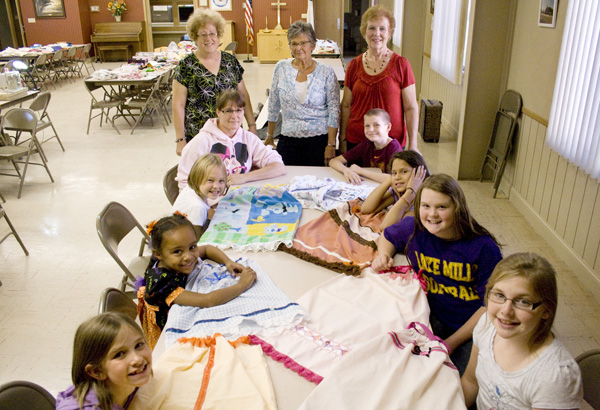 With the help of their youth leaders, eight to 10 youth who attend the Emmons Lutheran Youth Group after school are learning to sew dresses to send to a school in South Africa. The group has also collected numerous donations of sewing supplies to send to the school for the students there to also learn how to make the dresses and ultimately raise money for the school. From left going clockwise are Kyli Hanson, Isabella Meyer, Harper Fiske, Julie Meyer, Betty Anderson, Joey Honsey, Deb Yost, Blake Sletten, Taylor Ingledue, Sydney Dahl and McKenzie Sletten. -- Sarah Stultz/Albert Lea Tribune

EMMONS — It started out as a simple idea.

Area resident Deb Yost of Emmons Lutheran Church came across a pattern she could use to teach kids how to sew a simple dress.

Her daughter in Iowa Falls, Iowa, is a 4-H leader, and she had acquired the pattern to use to teach her 4-H students.

“I decided I wanted to do one,” Yost said.

Around the same time, Kim Katuta, daughter of Dale and Mary Mehus of Northwood, Iowa, was in town on a sabbatical from a small school in South Africa, called Dayspring Children’s Village, which is about 1 1/2 hours away from Johannesburg.

Katuta talked to the church congregation about the school and some of the needs it faced. 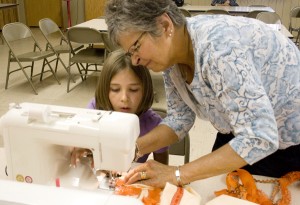 Yost said she asked Katuta if she’d be interested in taking a bunch of the dresses back to the school. Katuta’s husband, Elijah, who also works at the school, could likewise teach the children there how to sew to make more dresses to sell and make money for the school.

Yost decided to have the eight to 10 afterschool children in the Emmons Youth Group participate, and then she set out to begin gathering sewing supplies.

She also recognized the cost of sending something in the mail to South Africa and set out to try to raise some money to make the project possible.

She said the donations came in droves.

Julie Meyer, who oversees the Emmons Lutheran Youth Group, said when she heard about the project she was thrilled about it. She thought it would be a perfect fit for the youth in the program.

She is hoping the group can make 80 dresses.

“To see these kids doing this is really exciting,” Yost said. “It’s fun to watch the creativity.”

The Emmons youth continued sewing projects Tuesday at the church. When they’re completed with them, they plan to pin a picture of themselves and a note to send with them.

“I like to sew, and it’s fun when I get to sew for other people,” said Makenzie Sletten, 12. “It’s nice to give back because they don’t have a lot of money in Africa.”

Sletten said she was also excited about sending a little information about herself and a photo so the recipient can learn more about her.

Maybe they will end up communicating via letter or email.

Many of the children are just learning to sew themselves.

Yost said they plan to send some of the supplies and dresses in the next short while, and then a mission group going to Africa next year may take the sewing machines.