Funeral services for Sherman Kenneth Johnson, 96, of Albert Lea will be at 2 p.m. Saturday at Bayview/Freeborn Funeral Chapel. The Rev. Kent Otterman will officiate. Interment will be at the Lakewood Cemetery. Visitation will be one hour prior to the service. To sign the guest book, go to www.bayviewfuneral.com. 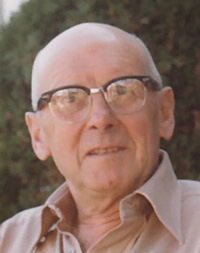 Sherman was born on May 28, 1915, to David and Julie (Fedge) Johnson in Albert Lea. He grew up in Albert Lea and was a lifelong member of Trinity Lutheran Church. On Feb. 15, 1936, Sherman was united in marriage to Florence Peterson in Northwood, Iowa. He owned and operated Johnson Transfer. In the early 1960s he sold his trucking business and went to work for Streater’s until his retirement in the late 1970s.

Sherman was a member of the Eagle’s Lodge, formerly the oldest living member. After Florence passed in 1984, Sherman lived on 5th Ave before moving to Bancroft Creek Estates. He loved Albert Lea, and people were drawn to him and enjoyed being with him. Sherman was well known for his wonderful sense of humor. Sherman was very handy, he enjoyed upholstery, repairing clocks and liked to go fishing. He will be deeply missed. Blessed be his memory.

Sherman was preceded in death by his parents and wife, Florence.