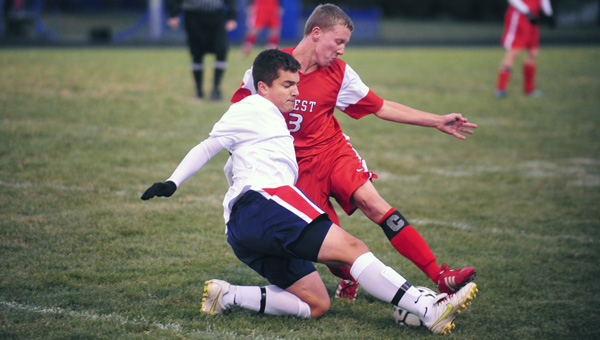 Albert Lea’s Cesar Herrera looks to control the ball Thursday during the first half. -- Andrew Dyrdal

The Albert Lea boys’ soccer team has been a revolving door of players this season.

Illness and injuries culminated this week as the Tigers took on two of the Big Nine Conference’s top teams — Mankato East and West. The Tigers lost Tuesday at East 7-0 and fell Thursday to West 5-0 at Hammer Field without four of its starters.

Forwards Timothy Furland and Tate Tufte were out with injuries, and Anthony Tate was limited to a few minutes battling an illness. With an already short bench, sophomore Preston Smith received a red card in 28th minute for serious foul play, leaving the Tigers with one less player against the powerful Scarlets, who have won nine of 10 games to start the season. The Tigers, on the other hand, are winless in its last four tries.

“As the results keep stacking up against us it gets harder and harder to go out and play and keep your head up,” Tigers coach Elia Romano said. “But I feel like we did that for the majority of the game tonight.”

The Tigers’ (2-7-1, 0-5 Big Nine) defense held strong in the first half, though, and held the Scarlets to one goal before the break. The Scarlets kept pressure on Albert Lea for most of the first half but Tigers defenders made blocks with their bodies and kept many shots from reach goalkeeper Cameron Hove.

The Scarlets (9-1, 4-1) scored its first goal of the game in the 17th minute when Alec Wright slipped a shot into the bottom-right of the net passed a diving Hove.

Trailing by a goal, the Tigers finally got into its offensive third midway through the first half and managed a couple shots on goal before Smith exited with a red card.

The Scarlets added two more goals in the first 15 minutes of the second half and added its final two in the final five minutes.

“They’re still playing with a lot of heart, and they still look like they’re having fun,” Romano said. “The main thing right now is confidence and maintaining and belief in ourselves when we take the field.”

The Tigers’ schedule become easier on Tuesday when the team plays at Faribault (1-7-1, 0-4-1) who’s winless in its last seven matches. The Tigers then host Rochester Century, play at Winona and conclude its regular season against Rochester John Marshall at Hammer Field.

Romano said once the team returns to full health he expects to become more competitive heading into the Section 1A Tournament.

“I’ve always maintained that we’re competitive,” Romano said. “The last couple results are the exception not the norm.”