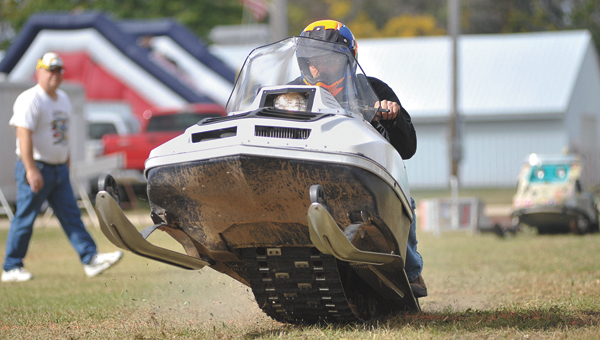 Dan Danko of Minnetonka lifts the front of his sled as he takes off from the starting line for a run Saturday during the snowmobile grass drags at the Vintage Pride Snowmobile Event held at the Mower County Fairgrounds. -- Eric Johnson/Albert Lea Tribune

AUSTIN — No snow. No problem.

Snowmobilers were happy to enjoy their favorite pastime Saturday at the Mower County Fairgrounds, even if there wasn’t any snow on the ground.

The third annual Operation Vintage Pride snowmobile event was held in Austin for the first time after two years in Albert Lea.

The event brought snowmobile enthusiasts together to race, swap parts and support the troops. All proceeds from the event went to buying care packages for deployed National Guard soldiers.

“The vintage snowmobile community is a close family,” said Jake Weaver, who ran the race. 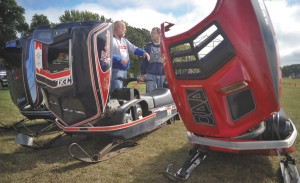 About 10 racers participated in the racing Saturday. Gregg Childs brought four racers and five sleds to the race through Bulldozer Racing out of Rochester.

Many of the children racing with Bulldozer get their start around age 4. So, most of the 11- to 12-year-olds racing Saturday had more than five years of experience, according to Childs.

“They’ve been racing quite a few years,” he said. “It’s routine for them.”

Most racers get involved with their fathers when they’re young, Childs said. He described racing as a good family pastime.

Many of the racers also race on ice ovals in the winter. But, there are differences between ice and grass racing.

“Grass is nice because it’s not cold,” Childs said.

In fact, he said grass racing is low key compared to races on oval ice tracks.

“This is all about fun,” Childs said.

On Saturday, riders were drag racing on about a 350-foot stretch. But don’t be fooled by the race distance. Childs, who builds most of his sleds, said two racers topped 70 mph on a 500-foot dirt track in past races.

“That’s cook’n right along for a little kid,” Childs said.

Dale Sloper, of Elk River, has been racing for about 12 years. He got into grass racing after years of ice racing.

“It’s just kind of an offshoot of winter racing,” he said.

Sloper said summer and fall is often more laid back than winter racing. One key reason is timing. With shorter days in winter, organizers have to fit the races into daylight hours.

Sloper, too, noted the Austin race is a laid back, enjoyable run. The Great Southern Grass Drag Nationals in Douglas, Minn., Sunday was the more competitive race of the weekend.

“This is more for charity and supporting the troops,” he said.

“This is more to have fun and socialize,” he added.