Twenty-eight-year-old Dustin Lee LaFavre of Webster was sentenced to four years in federal prison this week for his involvement in a more than $7 million mortgage fraud scheme between 2005 and 2008.

LaFavre pleaded guilty in December 2009 to a single count of conspiracy to commit mail and wire fraud in connection with the crime. 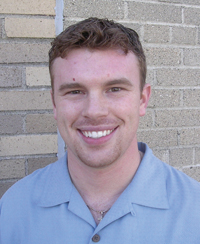 He is the son of Scott LaFavre, a commercial real estate broker who in April 2006 purchased the Albert Lea Golf Club with plans to build a high-end residential development named Eagle’s Rest. At the time of the purchase, Scott LaFavre stated he had plans to have son Dustin LaFavre be a major part of the operations, though it ultimately wound up being a failed deal.

In his plea agreement in federal court, Dustin LaFavre admitted working with a real estate broker to defraud at least 15 mortgage lenders in the sales of at least 172 properties. He and the broker recruited real estate buyers by promising they would receive large sums of cash from the proceeds of their mortgage loans.

The broker then helped LaFavre negotiate property values to inflate the price of the real estate. Mortgage lenders approved loans based on the inflated sales prices, and LaFavre, the broker and the buyers would split the difference between the inflated prices and the actual sales prices after the mortgage closings.

LaFavre also helped buyers qualify for mortgage loans by creating false verification of employment, depositing money into their bank accounts to make their balances appear higher and by providing them with down payments, according to the U.S. Attorney’s Office.

Kyle ordered that LaFavre surrender himself on Oct. 27 to the U.S. Marshal’s Office in Minneapolis or to the institution he is designated to enter. The judgment order entered by Kyle stated he recommended LaFavre be confined in a medical facility near or in the District of Minnesota.

Restitution will be determined at a later date.

He will be on supervised release for three years after he is released from prison.

Court documents state LaFavre cannot hold employment with fiduciary responsibilities without prior approval from the probation officer. He also must provide his probation officer access to any requested financial information, including credit reports, credit card bills, bank statements and telephone bills. He cannot incur new credit charges or open additional lines of credit without approval of the probation officer.