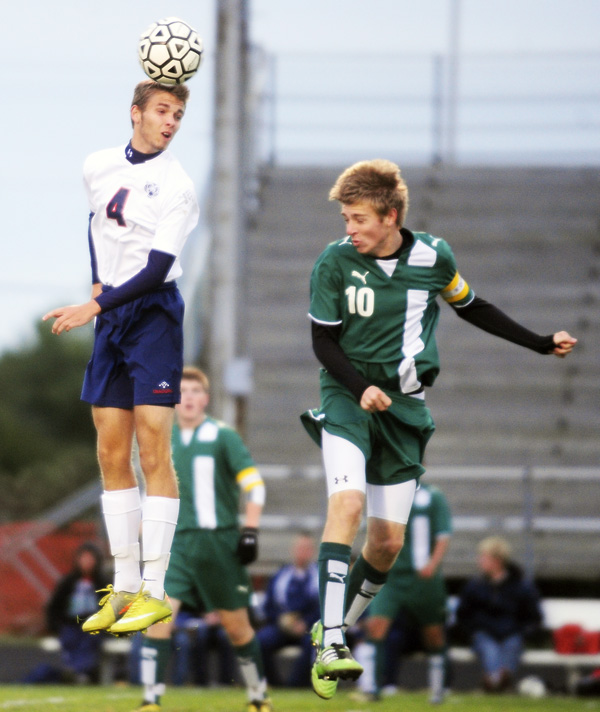 Albert Lea forward Tyler Shaw, left, hits a header Thursday during the first half of a 2-0 loss to Rochester Mayo. -- Andrew Dyrdal

The Rochester Mayo boys’ soccer team kept the pressure on Albert Lea’s defense Thursday in a 2-0 win at Hammer Field.

“I think we defended well tonight,” Tigers coach Elia Romano said. “We defended together. We got behind the ball quickly and were fairly organized.”

The Tigers (2-5, 0-3) opened the match with a few offensive chances before the Spartans settled into a groove and rarely let the ball into Albert Lea’s offensive third.

While the Spartans threatened with seven shots on goal in the first half, few were from clean looks until senior captain Nikolas Brozovich, who scored both of the game’s goals, was left alone in front of the net.

In the match’s 37th minute, the ball was centered to Brozovich who controlled the ball inside the box, turned and fired a shot on Tigers’ goalkeeper Cameron Hove. The ball hit the left post and bounded into the back-right of the net behind Hove.

Romano said while the Tigers’ defense played well in the opening half, the team struggled passing the ball which led to turnovers in the neutral zone.

“We had less time and space tonight,” Romano said. “As a result our decisions over the ball were not as good.”

Despite trailing by a point, the Tigers remained within striking distance for most of the second half until Brozovich added a second goal in the 65th minute.

The Tigers’ offense stretched the field during the second half and recorded four shots on goal to the Spartans’ 12.

The Tigers play again at 7 p.m. Saturday against Kasson-Mantorville at Hammer Field.