Sports teach same lesson over and over

There is a lesson that sports teach us time and time again. Whether you watch sports or participate in sports, this lesson presents itself all the time.

Yet for some reason, we viewers, listeners, readers, players, parents and coaches of sports forget it. The lesson is this: It’s just a game. The point of a game is to have fun.

I, too, was reminded of this yet again while playing in a disc golf tournament in Belmond, Iowa, on Sept. 17. Organizers had taken a relatively easy course and made it more difficult by combining some holes to make them longer and adding some new ones. 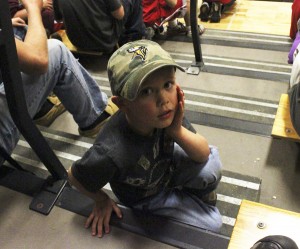 Forrest Engstrom, 4, at the Harlem Ambassadors game Saturday in Alden.

That seemed to take the pressure off me because, being mid-level player, I probably wouldn’t end up in the top division. This tournament was flighted, meaning that players are placed into one of three divisions based on their first-round performance. I just had to play my game and have fun.

In fact, I had one of the best players in the region, Jared Pittman of Rochester, in my fivesome in the first round. I ended up having a lot of fun chasing him the best I could. I nailed shots through the trees. I threw accurately on up shots. I birdied a few holes to make up for bogies. It was solid golf. I ended with a score of four over par, which on the modified course turned out to be pretty darn good. I qualified for the top division and was going to play the second round on the second card.

I had qualified for the top division before, but usually at the bottom, giving me little chance at winning cold hard cash (other divisions win credits for products from a disc golf vendor). Never had I qualified as high as the second card. Wow!

The next round would be the original, less-difficult version of the course. I thought this opened up a door for me to have a shot. I just had to perform well. I began to play more seriously and with more pressure.

I ended up shooting four over par again, even though the course was much easier. I should have shot four under par, really. I finished last among the top division’s players. What did I do wrong? In that second round, I had forgotten that it was just a game. I had forgotten to just have fun.

In that first round, I had laughed even when my disc landed out of bounds once. In that second round, I was disappointed in myself for little mistakes. Total attitude difference!

I’ve taken that lesson from Belmond and really made it a point to remember as I play disc golf with friends, by myself or in organized competitions. Just have fun. I mean, I usually do, but sometimes, like many of my fellow participants of many sports, I get too serious about it.

And my game has improved on the whole because of that little change in view.

Watching the Minnesota Vikings lose again on Sunday after blowing a double-digit halftime lead, I could have been angry. I know many Vikings fans who were. But the lesson of Belmond applies here, too. It was just a game. Sure, the players and coaches are paid big bucks, but we as fans must remember that this is just a source of entertainment. Don’t be too serious about whether they win or lose.

It’s hard to root for the Vikes. They string us along with good teams and outstanding players, and as a franchise they have a good winning percentage, one of the best in the modern era. However, they don’t bring home the Super Bowl trophy and have blown chances to reach the big game. This means fans have invested a lot of heart and soul in the purple and gold. I have cheered for this team since I was a little kid when they played outside.

But it is just a game. I had fun, even though they lost, watching them play on a Sunday afternoon while I taught my 4-year-old son how to fold towels and washcloths.

Perhaps the Vikings will get a good spot in the draft so they can surround Christian Ponder, Jared Allen, Percy Harvin, Kevin Williams, Visanthe Shaincoe and Adrian Peterson with some other talent, particularly in the secondary, so the team will go far next season. See, there is always a bright side.

Parents and coaches of high school sports seem to get taught that it is just a game, too. Coaches could stand to think of themselves more as youth developers sometimes and parents could tone down their “I’m always personally offended by everything” rhetoric.

In fact, a woman hollered at my wife on Saturday in the gymnasium bleachers of Alden-Conger School during the Harlem Ambassadors game over our kid making noise. I don’t mean spoke some words. I mean hollered. With anger. Over a little kid having fun cheering at a basketball game.

What silliness! Good thing my wife knows it is just a game. Some folks probably just need some additional schooling.