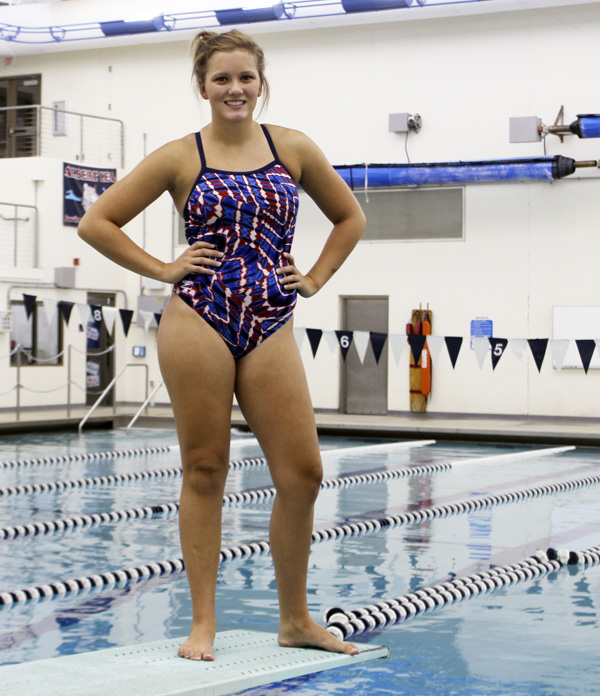 Albert Lea junior Karli Kriewall, above, has her sights set high for the 2011 campaign after finishing fifth in one-meter diving during the 2010 MSHSL Class A championships at the University of Minnesota Aquatic Center. -- Garrett Wampler

One year ago, Karli Kriewall couldn’t believe she had made it to the state championship as a sophomore diver for the Albert Lea Tigers.

Then she surprised herself even more by recording a fifth-place finish in the one-meter diving finals during the Class A swimming and diving championships at the University of Minnesota Aquatic Center.

Kriewall has her goals set even higher this year — only gold or silver will do.

“Her goal this year is top two at state, and she has the ability to do that,” Albert Lea diving coach Jill Johnson said. “She’s trained very hard in the offseason and she has worked hard every day at practice; She has come out ready.”

With a background in gymnastics, diving comes second nature to the Tigers junior. However, a little extra offseason practice at a few high-caliber collegiate diving camps won’t hurt her chances either.

Over the summer, Kriewall spent significant time training at two separate camps. One of the camps was at the University of Minnesota and the other was at Indiana University.

Each camp gave Kriewall an opportunity to learn from some of the top diving coaches in the nation.

She spent two weeks training at the U of M over her birthday.

The first week was a general diving camp with a total of 22 trainees. During the second week the field was narrowed down to the elite, which means the divers had to meet certain criteria to stay. Kriewall was one of the six divers remaining in the second week.

“It was two hardcore weeks of diving and I worked with U of M diving coach Wenbo Chen and the divers at the U,” Kriewall said. “It kind of got the rust off for the season.”

Kriewall then had the opportunity to train with about 305 divers at Indiana University under head coach Dr. Jeff Huber.

She said Indiana was a good experience because she was able to try out platform diving and the 3-meter board.

Johnson and Kriewall are still working on a few more dives this season in preparation for the state meet. Kriewall said the reverse 1 1/2 somersault has been giving her trouble early this season, and she also wants to get a 1 1/2 pike backward to bump up her difficulty level at the state meet.

“I’ve been doing a lot more stretching to get the difficulty higher,” Kriewall said.

Although she has been diving since seventh grade, her coach has seen an improvement this year that could be the difference maker at season’s end.

Johnson believes it is what also allowed her to pull within six points of her school diving record she set at last year during Albert Lea’s first meet of the 2011 season against Austin.

“It’s her level of confidence,” Johnson said. “She gets up on the board with confidence every dive. There is just that extra this year, she’s ready.”