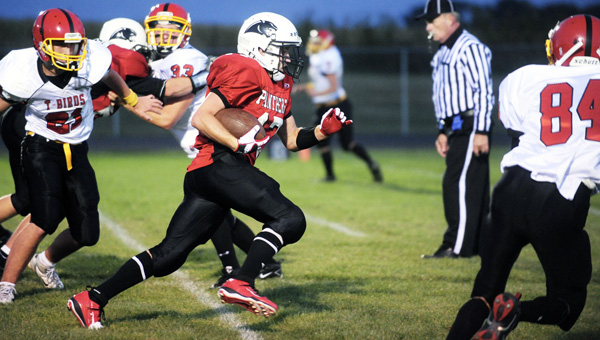 Senior rushed for 201 yards in win

NEW RICHLAND — Jacob Staloch is still getting used to his fill-in role as the Panthers’ starting running back.

The senior rushed for 190 yards Friday in the first half of the New Richland-Hartland-Ellendale-Geneva football team’s 73-8 win over Gibbon-Fairfax-Winthrop in New Richland.

Staloch, who’s getting a majority of the team’s carries in replace of the injured Geoff Ramaker, finished the game with 201 yards and four touchdowns on 15 carries.

Staloch said he credits the offensive line for his breakthrough game.

“They did an awesome job up front, and things just went our way,” Staloch said.

The former tight end had 44 rushing yards over the Panthers’ first two games against Blooming Prairie and Minnesota Valley Lutheran. He doubled that number Friday in the first quarter.

“You could drive a truck through those holes,” Staloch said of the running game. “I really kept my eyes downfield.”

Staloch had six runs of more than 10 yards and really got going toward the end of the first quarter. On first-and-10 from the Thunderbirds’ 29-yard line, Staloch broke a 20-yard dash to inside the 10. On the ensuing play, Staloch scored his first touchdown on a nine-yard run.

With 14 seconds remaining in the first leading 16-0, the Panthers kicked and recovered an onside kick at the opposing 43-yard line. Staloch rushed for 12 yards on the drive’s opening play and then broke through for a 31-yard touchdown run. Staloch was feeling so good he attempted his first and only extra point — it missed.

The Thunderbirds went four-and-out on the following possession but placed their punt inside the Panthers’ five-yard line.

It only gave Staloch more room to run.

On the Panthers’ first play, Staloch rushed for 21 yards up to the 26-yard line and then went untouched for a 74-yard touchdown on his longest run of the game. The two-play drive capped a 2 1/2 minute span where Staloch rushed for 159 yards and three touchdowns on six carries.

“It was great to see him going like that,” Panthers coach Dan Stork said. “We’ve been running hard all year but this was the first time we’ve have a back with more than 100 yards.”

Stork said after the game the Thunderbirds’ defensive scheme was set up for the Panthers’ running game to succeed. The Thunderbirds ran a 4-4 defense but brought their outside linebackers up toward the line of scrimmage.

“It really made it easy for us to get that dive going,” Stork said. “It’s a very simple play but it went big.”

Despite finishing fast, Staloch and the Panthers began the game on a slow start.

The winless Thunderbirds opened the game with a seven-play drive before punting to the Panthers from near midfield. The Panthers’ returner opted not the catch the ball and it settled at the three-yard line.

After Panthers’ quarterback Sam Lundberg threw an incomplete pass, a false start penalty pushed the team back half the distance to the goal and Staloch rushed twice for two yards. The Panthers punted the ball and its defense locked in.

The Panthers’ defense then held the Thunderbirds to 13 yards and no first downs over their next five drives. Meanwhile, the Panthers lit up the scoreboard.

On the Panthers’ second possession beginning at their own 16-yard line, Staloch opened the drive with an 11-yard run. Lundberg then connected with wide receiver David Lassahn for a 53-yard, and three plays later Lassahn scored on a nine-yard run for the game’s first touchdown.

The Panthers got the ball back but on third-and-18 threw and incomplete pass. The Thunderbirds’ Frank Fairchild was called for pass interference, which kept the drive alive, and Staloch rushed for gains of six, 20 and finally nine yards for his first of four touchdowns.

The Panthers recovered the ensuing onside kick, and Staloch rushed for 12 yards before the end of the first quarter. On the first play of the second quarter, Staloch ran for a 31-yard touchdown to put the Panthers on top 22-0 with 11:51 remaining in the first half.

The Panthers defense then forced a three-and-out but the Thunderbirds pinned the home team at their own five-yard line. On two carries, Staloch took the ball 95 yards for his third touchdown.

Lassahn got back into the action on the ensuing Thunderbirds drive, this time on defense. Facing third-and-six on his own 36-yard line, Thunderbirds quarterback Mitchel Kieker threw and interception to Lassashn who returned it 42 yards for a touchdown and 36-0 lead. Lassahn added an eight-yard touchdown reception with 5:18 remaining in the half to give the Panthers a 42-8 lead going into the break.

The Panthers, playing with mainly their second team offense, scored 31 points in the third quarter including touchdown runs from Staloch, Lassahn, Brad Claycomb and Matt Carlson.

Claycomb scored on a broken play when a pitch from backup quarterback Casey Rosacker got away from him but recovered the fumble and zigzagged his way 23 yards into the end zone. Carlson scored from 40 yards out off a backwards lateral by Rosacker.

Coach Stork said it was the Panthers’ most complete game of the season.

“It’s so nice to be able to have a great week of practice, install a game plan and stick to that game plan.”

In the closing seconds, Panthers players dumped a cooler of ice water on Stork’s head.

“It’s nasty,” Stork said of the ice bath. “I’m freezing. Those guys are going to run their butts off Tuesday.”