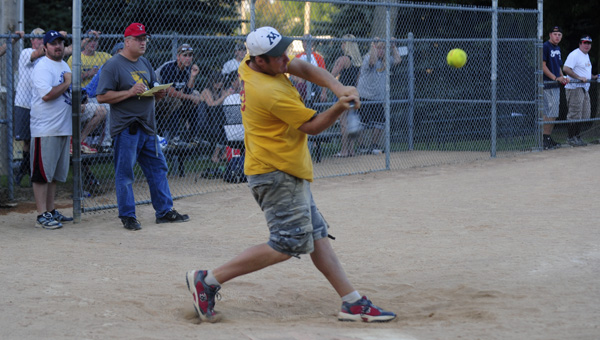 Isaac Walton positioned himself next to home plate, dug in, awaited his pitch and then started driving softballs toward deep right field.

The lefty managed to power five of his 10 balls over the 275-foot mark posted along the right field wall to win the first-ever home run derby during the Ryan “Pie” Truesdell fifth annual Memorial Sports Weekend at Snyder Fields in Albert Lea.

“We are doing good with great weather and a great crowd,” Ryan’s father, Scott Truesdell, said about the weekend. “It is a tribute to him when all of these people show up to honor him.”

Walton was joined by 12 other participants in the home run derby. Dom Schultz and Matt Dugstad tied for second place with three homeruns apiece during their at bats.

The homerun derby and the bean bag tournament, which brought 17 teams to play, were the new additions to the sports weekend that remembers Ryan and raises money for youth sports in Albert Lea.

Ryan died on Aug. 14, 2007, after becoming trapped inside a steel grain bin at the Glenville Grain elevator. He was 20 years old and about to start another semester at Rochester Community College, where he played baseball.

Every year there has been a large turnout for the softball tournament, but this year Truesdell said he is seeing more people come out that are interested in the other events as well.

“We’re seeing more people from outside the softball tournament coming out to check it out,” he said. “People that are curious and checking out things like the bean bag tournament and the silent auction.”

Friends and other community members also had the opportunity to participate in a volleyball tournament, a dinner at the American Legion, a golf tournament at Green Lea Golf Course and a fishing derby.

Beyond being around others in support of a good cause, Truesdell enjoys the stories he gets to hear and the old friends he is able to reunite with over the weekend.

“It is just a good tribute to my son,” he said. “It was a tragic way he died, so we’re just trying to make a sad situation better.”

Events for the memorial weekend spanned both Saturday and Sunday.