Telling a large story with a tiny subject

“Everything is nearly copacetic, but you shouldn’t ask. I might tell you the truth. My mashed potato crop is great this year.”

“Mashed potato crop?” I interrupt. “How do you plant mashed potatoes?”

“With a hammer. I had a dizzy spell yesterday. I dropped a dime in the revolving door of a store in Owatonna and it took me 10 minutes to find it. In addition, I’ve just finished a mystery novel that was supposed to be great. Ha! I knew who did it in just three pages.”

“Still reading books from the back to the front, eh?” I say.

“School is starting. Do you remember that ashtray I made in school? The teacher told the entire class that it was so good, it looked store-bought. Pop was plenty proud of me.”

“I remember that ashtray. It did look as if it had been purchased in a store. That’s because it still had a price sticker on it,” I say.

“Speaking of Pop, he just got some hearing aids. He had been scratching his head so hard trying to figure out what people were saying that he had brain under his fingernails. To celebrate, I played my accordion for him. Now he wants to return the hearing aids.”

A hummingbird flew past a turkey. The extreme birds drew me outside to enjoy the birdery (as KATE Radio’s Renae Sather calls it). I danced the Funky Chicken with two left feet to music only I could hear. “A-well-a, everybody’s heard about the bird. Bird, bird, bird, b-bird’s the word.” The song, “Surfin’ Bird,” by the Trashmen included the wise words that guide my life, “Papa-ooma-mow-mow, papa-ooma-mow-mow.” Goldfinches flew from Jerusalem artichokes into a maple like leaves flying back into a tree. The air above the yard filled with feathers. Swallows were in a feeding frenzy, eating flying insects. My wife came outside, and we ate ice cream on the deck. One of the swallows hit me with a dropping. We all have to go some time. I thought about getting a tissue and wiping the poop off, but by the time I’d gotten it, the swallow could have been a mile away. As Eliot Porter wrote, “Sometimes you can tell a large story with a tiny subject.”

John Beal, of Medford, wrote, “There is an increasing English sparrow population on my bluebird trail. For the first time in five years, I have them coming to a birdfeeder in our yard. There are three things that I feel may be contributing to the increased population. I see more horses in our countryside. Where you have horses you have feed which attracts the sparrows. I see more people raising beef to feed out for the freezer. More feed and more attraction. I see where people put up bluebird houses and lost their enthusiasm to check them at least once a week. These provide excellent housing for sparrows. Do English sparrows go through up and down cycles?” House sparrows are like lutefisk. People either love or hate them. Their numbers are declining dramatically in the United Kingdom. They are nearly everywhere in the United States. Large, widespread populations in varying habitats generally lead to stability in numbers, but surveys from around the country often show a slow decline in house sparrow numbers. Cyclical populations of a species are influenced by habitat changes, fluctuations in food supplies and predator densities. The changes in your local environment could boost house sparrow numbers. Bluebird boxes might be construed as habitat change that might lead to a shift in local nesting preferences. Perhaps your local house sparrows are concentrating their nesting efforts on nest boxes. 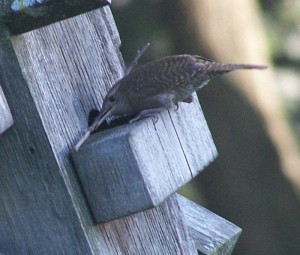 A wren struggles to get a stick into a nest. Photo by Al Batt.

Duane Hamer, of Hayfield, sent this, “I saw a blue jay in the road ditch that was laying on the ground with its wings and tail spread to the fullest. It had the crest feathers extended. It was in very short grass and spread out as flat as it could. I first thought it was dead because it was not moving at all, but when I started to drive away, it flew away. Did I see the behavior called anting?” When a blue jay is surprised or excited, the crest points forward. If it is frightened, the crest bristles like a bottlebrush. Jays spread out while sunbathing. It’s assumed sunbathing is meant to rid feathers of lice and other parasites, but wouldn’t parasites simply move to shadier parts? Anting is the act of a bird using ants for preening. A bird uses its bill to grasp an ant by the head or thorax and directs the ant’s abdomen toward its feathers. Excited birds sometimes topple over in frantic efforts to apply ants. A theory suggests that ant secretions soothe a molting bird’s skin irritated by new feather growth. Birds will use discarded cigarettes in place of ants.

Jeff Erickson, of Alden, asked when and where to put up a bat house. The best location is within a mile of water. Bats tend to fly along wooded edges and houses there are found faster. A bat house may be placed on a tree, pole or building. Boxes mounted on poles or buildings have higher occupancy rates than those on trees. On buildings, a bat house should be mounted under the eaves, 15 to 20 feet above the ground with some sun exposure, but not lit by bright lights. A bat house may be mounted at any time of the year, but those put up in the spring are occupied quickest.

Millie Westland, of Hayward, asked if two mulberry trees are required to get fruit. Yes and no. Red mulberry trees can have male and female flowers on the same plant (monoecious) or on separate plants (dioecious).

“Are dandelions native?” No. They were brought here from the Old World as a food source.

“Until he extends his circle of compassion to all living things, man will not himself find peace.” — Albert Schweitzer

Life is falling down. Getting back up is living. There comes a time when you’ll decide to surround yourself with people who make you laugh.