That’s how they roll 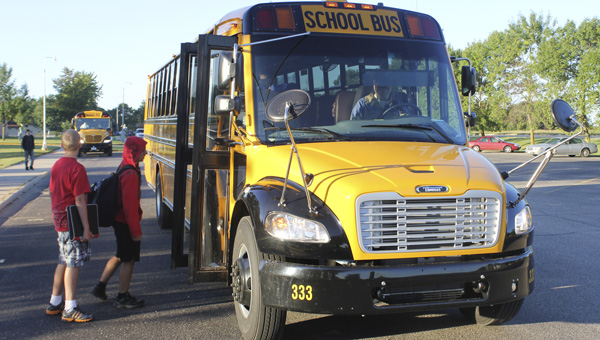 You may have seen them around town — new, shiny, yellow school buses.

The Albert Lea Bus Co. now has a fleet of 29 buses and nine vans and short buses.

Of those, 24 are brand-new Thomas Saf-T-Liners and four of the vans are brand-new this year. The other vehicles had been replaced new last year.

“During the bidding process we had to offer something to compete with the bigger contractors,” general manager Richard Polley said. 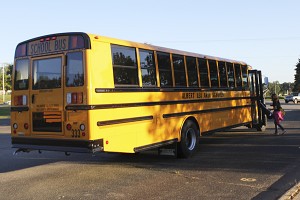 Albert Lea Superintendent Mike Funk said the school board was pleased that a local company was able to compete in the bidding process.

“We’ve got drivers who know the kids and know the routes,” Funk said.

He said he was impressed that the new buses include cameras, which will help parents, students and drivers feel safer.

“I feel more comfortable as a parent knowing the cameras are there recording,” Funk said.

Polley said each new bus has three video cameras, one in the front pointing back, one in the back pointing front and one aimed at the door. Each has a hard drive that can hold a few weeks of footage.

“This is not required by the school district, but it’s a good feature,” Polley said.

The new fleet of buses cost $80,000 for each full-size bus, and $50,000 for the vans. Polley said it was a big investment for the company, but they wanted to stay competitive with larger contractors and have safe vehicles.

Polley said the buses get anywhere from 8 to 10 miles per gallon, which is similar to older buses. A new feature on the bus is the addition of diesel exhaust fluid, which keeps the exhaust cleaner to meet regulations. Each fuel tank on a bus holds 100 gallons, and one gallon of that must be the DEF and the rest diesel.

The bus company had previously had International buses, and Polley said they made the switch to Thomas because they had had some engine issues with previous buses. He said he was looking forward to less maintenance issues with a fleet of new buses.

“I’m glad we’re going to be around for a while,” Polley said. “We appreciate our drivers and hope the school district does, too.”

Another new feature on the buses is GPS. Polley said this will allow the office to know exactly where all the buses are at all times. Funk said he’s glad about this feature in instances where buses get stuck or need help.

Other new safety features include higher seat backs, more reflective tape and larger windows that could be used as emergency exits. Other emergency exits include the roof fence, back door, front door and the windshield can be kicked out if needed.