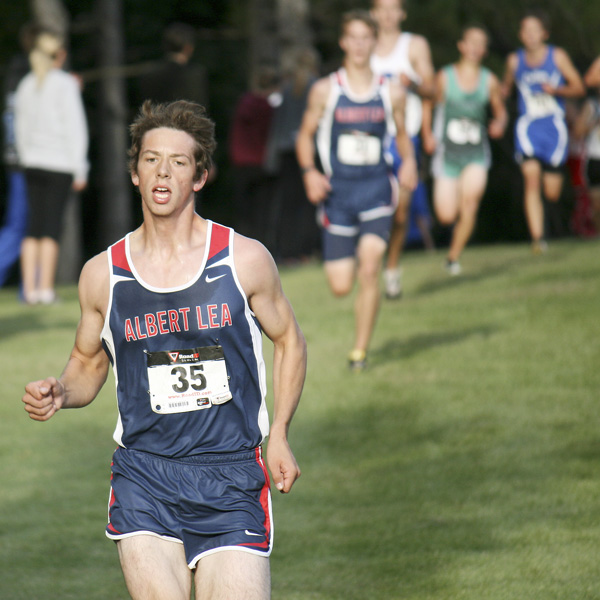 Issac Staat looks the same as any other runner on the Albert Lea boys’ cross country team when he’s donning the red and blue jersey for the Tigers.

The differences are found behind the scenes with the senior who transferred to Albert Lea from Kelso High School in Washington state in June.

Staat is a mature individual, the oldest of 10 children and driven by the passion he has for a sport that is as much a physical competition as a mental one.

“He is just so coachable. It’s like having another assistant coach with his maturity,” said assistant cross country and track coach Lon Nelson. “His work ethic is second to none and he has a lot of talent.”

He began running with his father at a young age and has grown into one of the top runners on the team.

Born in Maryland, Staat moved to Ohio at age 3 and to Cloquet at age 6. From there he moved to Washington when he was 13 and now he finds himself in the land of 10,000 lakes.

His life experiences have shaped him into the individual he is. Besides running and going to high school, Staat also takes college classes at Riverland and was recently hired as a server at Perkins.

“He is an outstanding kid,” Tigers head coach Jim Haney said. “He’s got it all figured out. He’s shown tremendous leadership for my team and I couldn’t be happier that he is a part of Albert Lea cross country.”

Albert Lea turns to Staat and sophomore Blair Bonnerup as their 1-2 punch in cross country. During the Faribault Invitational at Alexander Park, Staat placed 48th overall in 17 minutes and 54.6 seconds.

Staat recognizes a large difference here in his training that he hopes can help him achieve his goal of qualifying for the state meet.

“In Washington we would basically train for the meets, but here we use meets to train,” he said. “It would cause me to peak in the beginning of the season.”

“My better sport’s track,” he said. “That is something I’m looking forward to.”

He began running track in eighth grade and last year in Washington, Staat won the 800-meter run in 2:00.92 at the Southwest 3A District track meet at McKenzie Stadium in Vancouver. He then placed 16th at the WIAA 3A state meet.

The senior hopes to add one more sport to his resume this winter. It was a sport he learned to play in Cloquet — hockey.

“I want to play and try to make the team for Albert Lea,” Staat said.