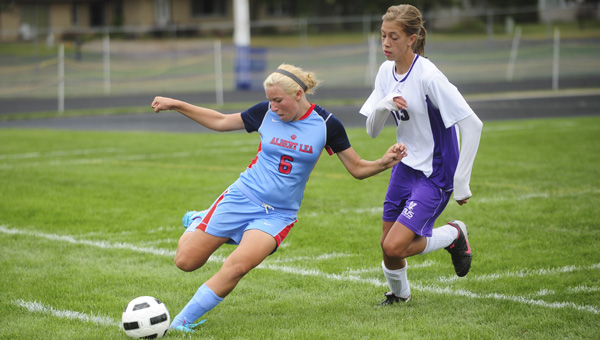 Freshman Taylor Thompson works on the defensive end of the pitch in the first half to clear the ball. Thompson added a goal of her own in the second stanza. -- Garrett Wampler/Albert Lea Tribune

Rick Barnhill had a few elements working against his Tigers’ soccer team during the Albert Lea Invitational tournament final.

For starters, many of his players were battling illness and they were also set for a match up with unbeaten New Ulm Public/ NUACS/ MVL.

Even with everything working against them, the Tigers (6-2-1) clawed their way to the tournament title with a 4-0 shutout against the Eagles (9-1-1).

“I’m a little surprised with the way we played to be honest, because there were some people that aren’t 100 percent,” Barnhill said. “They are under the weather.”

“I had to urge and extract from them everything I could get.” 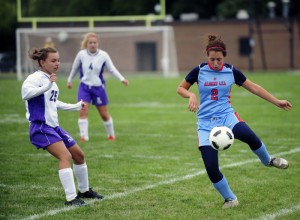 Smith couldn’t handle the rocket and the ball found its way through her hands and into the goal for the score.

“We have found something that works for us,” Barnhill said. “Hopefully we can ride it the rest of the way.”

In the 23rd minute, Smith was drawn out of the goal just enough for Grace Gjersvik to float a ball past her for the go-ahead goal.

Captain Katie Williamson proved she could score from long range early in the second half. Williamson bent a ball into the net from about 30 yards out, to add to the Tigers’ lead.

Working with a lead for most of the game, the Albert Lea defense began to shine. They held the Eagles to only seven shots on goal keeper Hanna DeVries.

“I thought we played good collective team defense,” Barnhill said. “It was a very coordinated effort and it had to be because New Ulm is a very good team.”

Lindsey Stewart directed the Tigers defense and received help from a variety of Albert Lea players in the effort to keep the Eagles from finding the goal.

“We are kind of all the same age,” Stewart said. “We’ve been working together for a while now, which makes it easy.”

Freshman Taylor Thompson connected on the Tigers’ final tally of the day on a cross from Gjersvik.

One of the Tigers leading scorers, Brooke Hanson, suffered a head injury and sat out the remaining 31 minutes of play. While the extent of the injury is unknown, Barnhill said she’ll be evaluated this week. There is a possibility she may be unavailable this week and the team will err on the side of caution.

Fairmont (6-3) defeated Mankato Loyola (2-5) by a score of 2-1 in the consolation final of the invitational.