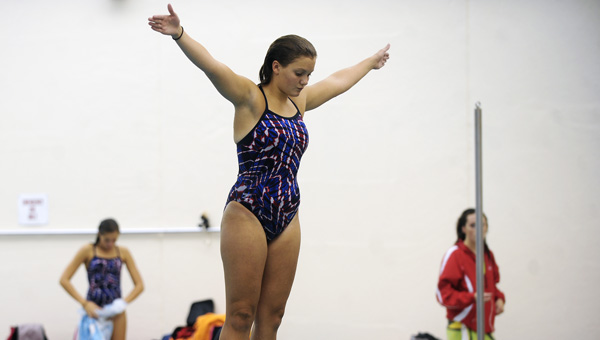 Even after the final event was over and the scores were tallied revealing a 95-91 Owatonna victory, the Albert Lea Tigers girls’ swimming and diving team had nothing but smiles on their faces.

They gave the class AA Huskies (2-1, 2-0 Big Nine) all they could handle during the meet, leading the scoring in all but two events while setting a school and pool record in the process.

“It was a total team effort,” said John Schmitz, the Tigers’ head coach. “We told the girls we picked up not where we left off from last year, but we were better than that the first meet of the year.”

Leading by only two points heading into the night’s final event, the Tigers needed to either win the 400-yard freestyle relay or finish second and third for a tie with the Huskies.

Exciting the final turn, they were in a dog fight for second place. Bailey Sandon beat Madison Eggermont off of the wall and out touched the Huskies sophomore for second place by .04 seconds.

“We have nothing to feel bad about,” Schmitz said. “This was an amazing performance.”

The relay turned in a time of four minutes and 9.97 seconds.

Albert Lea (1-1, 1-1) began the night by showing Owatonna they were in for a fight all night long.

The Tigers took first and second place in the 200-yard medley relay, jumping out to an early 12-2 lead behind a winning time of 1:57.59 by Anna Anderson, Morgan Field, Galen Schulz and Lindsey Horejsi.

Horejsi returned to the pool in the girls’ 200-yard individual medley and created quite a stir along the pool deck. The eighth-grader used smooth strokes and quick turns to turn in a time of 2:15.95, breaking the Tigers’ team record.

Albert Lea was able to hold off the Huskies through 10 events until the 100-yard backstroke. Owatonna used a first and second place showing by Lindsey Price and Madelyn Thein, respectively, to take a two point lead.

The lead was short-lived as Horejsi stepped back up to the blocks for the 100-yard breaststroke. Horejsi swam a time of 1:08.90 to win the event and to break the pool record by .99 seconds. Jennifer Strom, of Rochester Century, has held the record since the 2009 season.

“I just thought I could break the record tonight,” Horejsi said. “When I saw it up on the board I couldn’t believe it.”

The record breaking performance returned the Tigers’ two-point lead, setting up for the dramatic finish.

Albert Lea returns to the pool on Tuesday in a meet against Saint Peter.