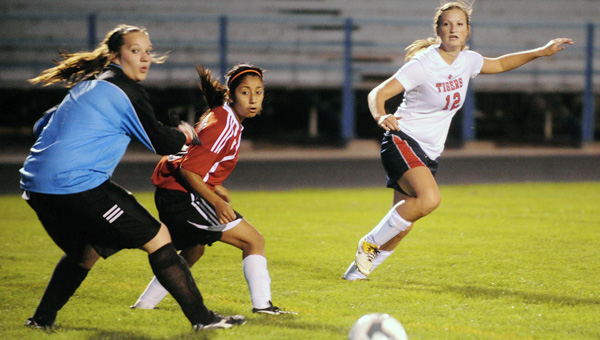 Albert Lea’s girls’ soccer team would only need two goals to secure a victory against Worthington at Hammer Field on Tuesday night. The Tigers tallied seven in their 7-1 victory.

Six different players scored goals during the offensive onslaught. Sophomore midfielder Sarah Savelkoul sent home two scores of her own. Her first came in the 35th minute of the game and the second came during the 47th minute.

“My teammates helped me out a lot,” Savelkoul said. “We’ve all been playing together for a couple of years. We’ve had good 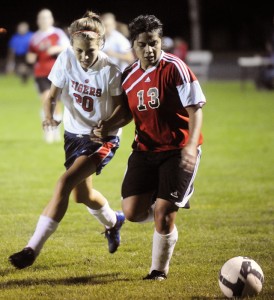 Albert Lea sophomore forward, Larissa Hacker, left, battles for the ball Tuesday with Worthington’s Yesenia Esparza during the second half of a match at Hammer Field. The Tigers won 7-1 to stay undefeated at home this season. -- Garrett Wampler

chemistry this whole year and I hope we go far.”

The Tigers began the night controlling possession of the ball much like they did for most of the night. Then in the 13th minute, Albert Lea’s offensive attack was able to break through for the opening tally.

Sophomore Gretta Johnson pulled the Trojans goalkeeper out of the net with a cross long enough for captain Katie Williamson to find the back of the goal from the backside.

Worthington answered with their lone score of the game in the 19th minute of play. Alina Keoduangsy lofted a ball high in the air from outside of the box, only to fall into the goal.

It looked like the chess match would enter half-time with the score tied at one goal a piece but the Tigers had other plans. With six minutes and 38 seconds left before the break, Brooke Hanson found Anna Anderson on a corner kick. Anderson settled the ball and fired a rocket off of the left post and in for the goal.

“I was pleased with the offense tonight with that kind of goal production,” said Rick Barnhill, Albert Lea’s head coach. “It is something that has been a concern coming into this season.”

The Tigers weren’t finished scoring in the first half. Two minutes later freshman Isabel Ehrhardt misfired the ball off of the post but Savelkoul was there for the put back and her first of two goals of the contest.

In the second half, the shooting clinic continued for Albert Lea. This time the young squad rattled off three tallies in 12 minutes beginning with Savelkoul’s second score of the night.

This time the sophomore played the ball off of a well placed cross from Williamson and was able to finish for the goal.

One minute and 41 seconds later, the Tigers’ lone senior, Kelly Nelson, found the back of the net after she received the pass from Hanson.

“We’re creating chances,” Barnhill said. “The finishing has been a little suspect this year, but the finishing was there tonight and we were able to get good delivery to the frontline players.”

Hanson then added a goal to her two-assist performance when she delivered the ball into the bottom-left corner of the goal on a penalty kick.

Eighth-grader Becca Dup got into the action for the Tigers in the 68th minute of the game. Dup used her breakaway speed to pull away from the Trojan defense and kicked the ball high off of the crossbar and in for the night’s final goal.

Albert Lea is slated to face Owatonna in a Big Nine matchup on Thursday with the game scheduled to begin at 7 p.m.

“Last year we lost 7-0 and I tore my right LCL,” Savelkoul said. “Hopefully we’ll be able to stick to them and hold them this year, but we have to keep getting goals.”