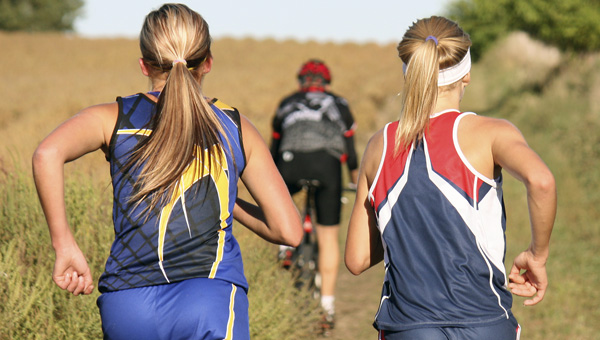 Albert Lea’s Chrissy Monson, right, runs neck and neck through a soy bean field with a runner from Adrian and follows the lead bike Tuesday at a cross country meet in Fairmont. -- Bryce Gaudian

Both the boys and the girls Albert Lea cross country programs had successful showings at the Fairmont Invitational on Monday.

The boys finished in second place out of four teams and were led by senior Isaac Staat’s fourth place performance.

Chrissy Monson had another strong showing for the Tigers. Monson beat the second- and seventh-ranked girls in Class A en route to Albert Lea’s third place finish as a team.

“Both teams are running very well,” said head coach Jim Haney. “I am happy with the way they are competing to be better and to move the team toward the top of the standing.”

Staat excelled on the course, covering the 5k distance in 17 minutes and 51 seconds. With the absence of two of the Tigers’ top seven runners, others picked up the slack and Albert Lea managed four runners among the top fifteen overall finishers.

“The boys really stepped up and ran well against some good competition,” Haney said. “We will continue to keep up the momentum we have as we run the bluffs of Winona on Saturday.”

On the girls’ side Monson continued her dominance, completing the 4k course in 15:06.7. Her first place time was 13 seconds ahead of the next competitor.

“Chrissy had an impressive effort,” Haney said. “She ran relaxed and used her experience in big races to defeat the field.”

“The girls also have momentum on their side,” Haney said. “I expect a great effort at Winona. My runners love the challenge of the bluffs of Winona.”