Tigers crumble in 2nd half loss to Fairmont 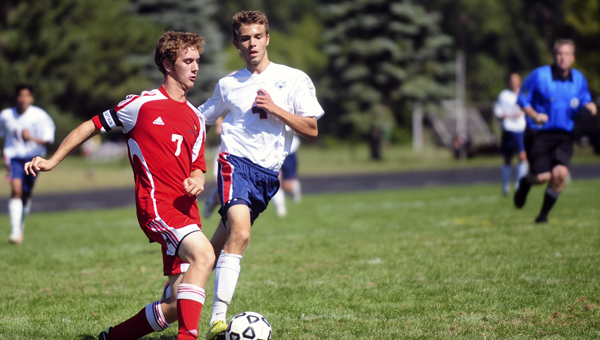 Junior Tyler Shaw had a first half hat-trick for the Tigers in the loss. His first goal came less than three minutes into the contest. -- Garrett Wampler/Albert Lea Tribune

“That is the team we are capable of being,” Albert Lea head coach Elia Romano said. “The team that came out in the second half was the team that we are still at times. That we are fighting hard not to be.”

Junior Tyler Shaw lead the Tiger’s attack in the first half with three of their four scores. His first tally came just over two minutes into the game on a back door finish from Preston Smith.

Elias Lazaro was the next Tiger to spot Shaw in front of the net for a goal. Timmothy Furland also pitched in to Albert Lea’s effort by firing a ball directly at the Cardinal goal keeper, but there was enough power on the ball for it to find its way into the goal. 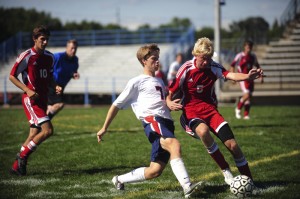 Timmothy Furland pitched in to Albert LeaÕs effort by firing a ball directly at the Cardinal goal keeper, but there was enough power on the ball for it to find its way into the goal. -- Garrett Wampler/Albert Lea Tribune

“The first half was probably the best half of passing we’ve done as far as choosing options,” Romano said. “That makes soccer a lot easier.”

Shaw added his final goal of the contest on another back door score from Smith.

Fairmont came out to the pitch at Hammer Field as a completely different team in the second half.

The Cardinals scored their first goal in under three minutes to begin the comeback on a header by Joe Driano.

Goals by Lucas Miles and Alex Nelson pulled the Cardinals back into the game and with five minutes and ten seconds left Fairmont delivered the equalizer.

Bruno Beidacki sent another header past Tiger goal keeper Tom Furland to even the game at four goals and send the match into overtime.

“We have to give Fairmont a lot of credit,” Romano said. “They came out with a lot of intensity and they decided to make every ball theirs. Credit to them, but certainly we’ve got to take a hard look at ourselves.”

In the second overtime period, Miles slipped behind four Tiger defenders inside of the box and delivered the game winner on a top shelf score on Albert Lea’s Cameron Hove.