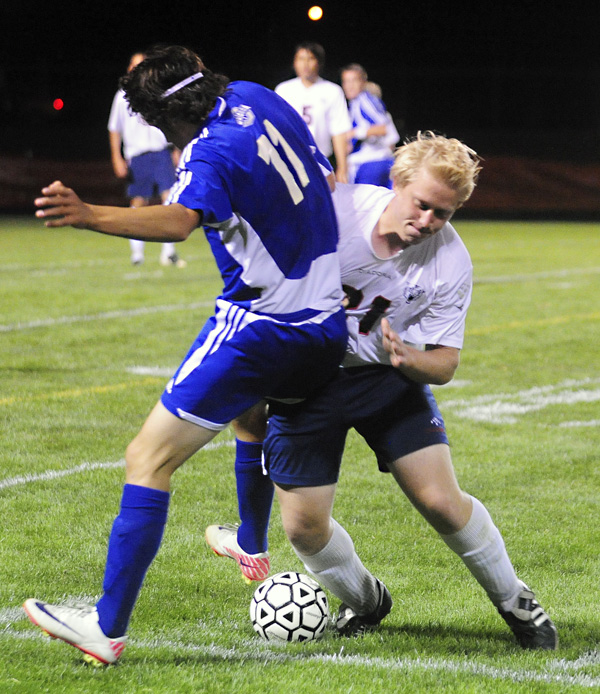 Albert Lea midfielder Griffen Wangen, right, looks to steal the ball from Owatonna’s Robert Deetz Thursday during the second half of a 2-1 overtime loss at Hammer Field. The Tigers host a tournament at Hammer Field on Saturday. -- Garrett Wampler

Even after suffering their third loss of the year, Albert Lea boys’ soccer head coach Elia Romano was pleased Thursday with parts of the Tigers’ 2-1 overtime loss to Big Nine foe Owatonna.

The Huskies managed the winning goal three minutes and 16 seconds into the first overtime session and staved off all of the Tigers’ advances to secure the victory.

“I think this is a pretty positive result,” Romano said. “It stinks to lose late like that in overtime, but overall we can take a lot of positives from this.”

Romano said Albert Lea (0-3, 0-2 Big Nine) played more relaxed and coordinated through the midfield which helped on the offensive end of the pitch. The defense did an improved job of covering their assignments on the other end of the field.

Huskies freshman Dexter Leer scored the game-winning goal during the games 83rd minute. Albert Lea goalkeeper Cameron Hove had just made a diving save on another Owatonna shot and recovered just in time to watch Leer’s shot sail into the net from about 16 yards out.

“A volley from 16 yards out with that kind of pace on it is going to be hard to stop even if your not just getting on your feet,” Romano said.

Owatonna (2-4, 2-0 Big Nine) got on the scoreboard first with 17 minutes and 35 seconds remaining in the first half.

Robert Deetz found Brenden Buryska off of a corner kick for the score. Buryska settled the ball and buried it into the back of the net.

The Tigers had trouble clearing the ball out of their own box all night. A problem that Romano has taken notice of.

“I think one of the issues we still have is we let the ball roll around inside our 18 and in front of the goal too much,” he said.

Albert Lea was able to answer with a goal of their own to set up the overtime session.

This time it was a solo goal by sophomore Timmothy Furland. The attacker drove the ball towards the goal from about 30 yards away. Furland’s shot kissed off the crossbar and went in for the tally.

“It was a good effort from Timmy,” Romano said. “That’s his first goal of the year and I think he’ll be really happy.”

Romano and his team return to the soccer pitch at Hammer Field this weekend for a tournament. Albert Lea is hosting Fairmont, Stewartville and Schaeffer Academy.

“I think we just need to be more confident and get better at taking the balls out of the air,” Romano said.