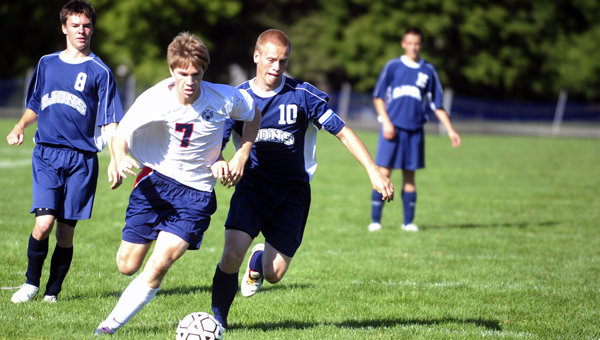 Timmorthy Furland beats the Lions defense down to the end line which sets up his shot across the front of the goal keeper. -- Garrett Wampler/Albert Lea Tribune

Even with the Albert Lea boys’ soccer team securing their first victory of the season on Saturday, head coach Elia Romano was pleased with the result but not the performance of the Tigers.

Albert Lea used a quick goal in the first two minutes of play from Timmothy Furland to propel them to a 2-0 triumph over Schaeffer Academy in the first game of the Albert Lea Invitational.

“I’m pleased with the team because it is the first win of the season and that is important,” Romano said. “It’s always good to score and its nice to score early.”

In just the second minute of the game the Tigers broke free. Furland dribbled through the defense and put a quick shot on the goal keeper that slipped in for a goal. 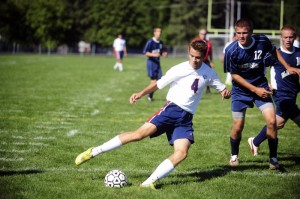 Junior attacker Tyler Shaw works inside the Lions box towards the goal. Shaw assisted the Tigers second goal on his throw in during the second half. -- Garrett Wampler/Albert Lea Tribune

From that point the Tigers attack seemed to lull and lose the intensity they began the game with.

“It was nice to get on the board early, but I do thing we lost a little intensity because it came so quickly and so easily,” Romano said.

Holding on to a one goal lead wasn’t difficult for the Tigers in the first half. They controlled possession over the Lions for a majority of the Stanza and only allowed three shots on senior goal keeper Tom Furland.

Anytime the Lions intruded into the Tigers territory, there was someone to turn them away around midfield.

Albert Lea added another tally during the 69th minute. Tyler Shaw threw the ball into the Lions box, the ball bounded over the goal keeper and senior Auston Larson was there for the finish.

Romano said the Tigers need to get better at choosing the best option in the midfield, because the way they are playing now is causing too many turnovers.

The Tigers head coach expects the team to get stronger and stronger with each game they play and when they get their full squad back onto the field. He said they were playing without seven of their team members on Saturday.

Next up for Albert Lea will be the winner of Fairmont and Stewartville with the final slated for a 2 p.m. start at Hammer Field.