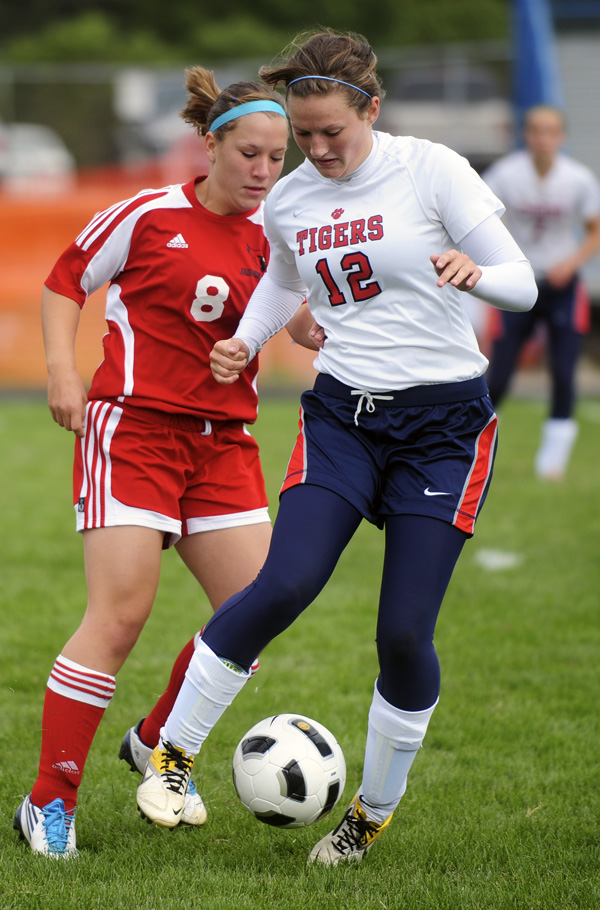 Albert Lea’s Sarah Savelkoul (12) looks to control the ball Saturday during a 2-0 win over Farimont at Hammer Field. -- Garrett Wampler

Sophomore Brooke Hanson led the Tigers to both of the team’s goals. The first tally came in the fourth minute of the game.

“We scored early on in the first four minutes,” Barnhill said. “Brooke Hanson scored on a nice shot. Thank goodness for her because we just didn’t get anything else from anyone.”

Hanson’s first score came on a 30-yard floater over the head of Cardinals’ goalkeeper Shannon Christianson.

After the first goal, Albert Lea looked sluggish and exhausted.

They were getting beat to most of the 50-50 balls in the first half and on their opportunities to finish on a cross or through ball.

“We just couldn’t finish,” Barnhill said. “I’ll give the credit to Fairmont they are a good defensive team.”

The Tigers managed to hold on to the early 1-0 lead, mostly in part to the team’s ability to keep the Cardinals (5-3) out of the final third of the field.

Albert Lea returned after the intermission looking like a fresh team.

Hanson was able to capitalize on her second goal in the 47th minute of the game. The sophomore intercepted the Cardinals’ attempt to clear the ball out of their own box and buried a top-shelf goal into the back of the net.

“It just got popped out to me and I got it in,” Hanson said.

Barnhill said he expects more out of his team but he understands that they are still a young team that is trying to find its way in a new system.

“We just don’t have first nature type shooters and forwards,” he said. “We just aren’t blessed with those abilities, so we’re just trying to manufacture them and piece it together.”

Albert Lea has to find a way to play better in the final third of the field and get a foot on the ball to finish their scoring opportunities.

Barnhill expects his team to play with a winning attitude and a passion for the game.

“We have to feel each and every time we play that we can win and have that achievement mindset,” Barnhill said. “And have passion when we come out to play.”

The Tigers returned to face New Ulm Public/NUACS/MVL (9-0-1) in the final of their tournament at 12:30 p.m. Saturday. Look for coverage of that game in Monday’s Tribune.

New Ulm defeated Mankato Loyola (2-4) by a score of 1-0 early Saturday morning to punch their ticket to the final.