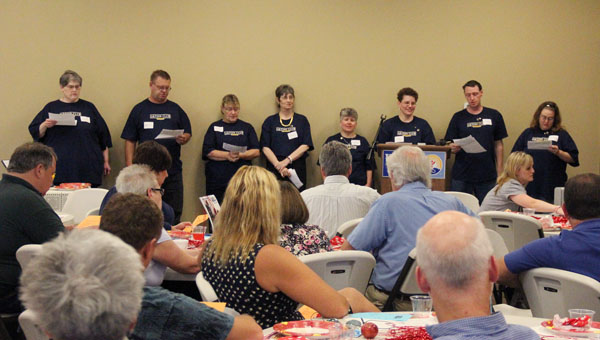 The United Way of Freeborn County kicked off its campaign Thursday and had a representative from Group Support Services talk about how the group has been supported.

Jeannie Jackson, executive director of Group Support Services, said the program works with people who have anger management issues and has helped more and more people as it has grown. 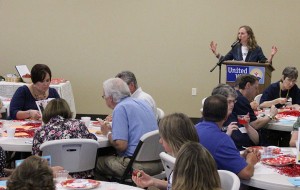 “It has really kind of taken on a life of its own,” Jackson said.

The people in the classes talk about how to manage emotions and about different kinds of abuse. Jackson also help with supervised visits for families with conflict.

“Thank goodness for the United Way,” Jackson said. “It’s something everything benefits from.”

Jackson said there are five support groups that meet weekly for 28 weeks. This year Jackson’s goal will be to talk to students in the schools about domestic violence and healthy relationships.

The Aktion Club also had a special presentation where they sang a song that the audience was encouraged to be involved in. The club also introduced themselves and the members talked about their interests. The club is involved in Arc of Freeborn County and has 21 members. 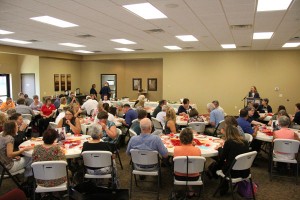 United Way Executive Director Ann Austin said the kickoff luncheon, held at noon at Bonnerup Funeral Service, is a chance for volunteers, agency directors and the community to get together and to hear messages from some of the programs who benefit from the campaign. Austin said new programs it’s supporting this year include Habitat for Humanity Freeborn/Mower, Girl Scouts and a youth program at the Salvation Army.

“Every year there’s new things that come up,” Austin said. “We want people connected year round.”

“We’re always focusing on reaching the need,” Austin said. “I really believe we can solve the issues we’re facing.”

All the food for the luncheon was donated by area businesses and by individual people who participate in the farmers market. Austin also spoke about upcoming events including the Keep the Fires Burning fundraiser to be held on Oct. 28 and a wine tasting on Nov. 4. Coming up on Sept. 18 will be a pancake breakfast with Denny Brue’s pancakes from 8 a.m. to 12:30 p.m. at Bonnerup Funeral Service. Proceeds go to the United Way.

She also announced that in the spring the United Way book will be “Timmy Learns a Lesson,” which was written and illustrated by Nicole Borneman, a local ninth-grader.