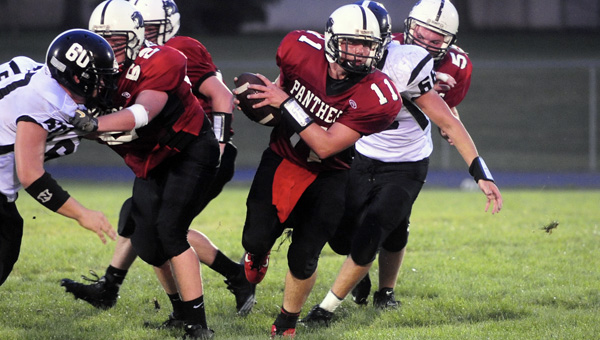 NEW RICHLAND — The Blossoms wasted no time Friday in finding the end zone.

On the first play from scrimmage, Blooming Prairie quarterback Luc Zellmer passed to Gabe Kartes for a 64-yard touchdown en route to a 33-30 win over New Richland-Hartland-Ellendale-Geneva. The Panthers didn’t go down though without a fight.

After trailing 20-0 after the first quarter, the Panthers’ offense began matching the Blossoms’ big-play ability. In the second quarter on second-and-10 from their own 43-yard line, quarterback Sam Lundberg passed to David Lassahn for a touchdown. Lassahn got behind the Blossoms’ secondary, slowed down for the catch and made one cut toward the center of the field for the score.

The Blossoms scored again just over four minutes later to build a 27-6 lead, but the Panthers again responded quickly.

After starting the drive from their own 37-yard line, Lundberg threw an incomplete pass and rushed for 18 yards to move into the Blossoms’ territory. A false start pushed the Panthers back to the 50-yard line before Lundberg again found Lassahn — this time for a 50-yard score.

A two-point conversion pulled the Panthers within 27-14 heading into the first half’s final drives.

With 7 1/2 minutes left in the second quarter, the Blossoms went on one of the game’s longest drives, moving from their own 15-yard line to the Panthers’ 18. A botched snap sent the Blossoms back to the 29-yard line on second-and-11 and after a six-minute drive, the team turned the ball over on downs.

On Panthers went four-and-out on their ensuing drive and gave the Blossoms’ high-octane offense one more shot before the second half. Blooming Prairie moved the ball from the Panthers’ 46-yard line to the 18, and with less than one second remaining in the quarter a pass from Zellmer to Michael Thomas was dropped in the end zone.

The Panthers received the ball to open the second half and were headed toward the red zone when Lundberg fumbled the ball and the Blossoms recovered. A block in the back call set up Blooming Prairie at their own nine-yard line, and on the first play of the drive Zellmer attempted to throw a screen pass over the Panthers’ charging defensive line. Defensive tackle Carter Tollefson caught the soft pass and returned it five yards for the touchdown.

The Panthers erupted on the sidelines as a two-point conversion cut the Blossoms’ once 20-point lead to 27-22 with 8:52 remaining in the third quarter.

Both teams were held scoreless for the rest of the third quarter, and on the first play of the fourth Zellmer threw his second interception.

NRHEG took over at their own 44-yard line, and Lundberg rushed for 19 yards before penalties pushed the Panthers back. Facing third-and-26 from their own 48-yard line, Lundberg threw a screen pass over the middle to Jake Staloch who weaved down the field for a 52-yard score. The two-point conversion gave the Panthers a 30-27 lead with 9:28 left in the game.

The Blossoms answered with a five-play drive before Zellmer threw an interception to the Panthers’ Lassahn. On the ensuing drive, NRHEG went three-and-out and punted with five minutes remaining.

Beginning their drive from the Panthers’ 47-yard line with 4:56 left on the clock, the Blossoms ran seven consecutive running plays before facing fourth-and-four at the 15-yard line. With just over one minute remaining, Zellmer found a sliding Luke Hueman in front of the Panthers’ sideline for a seven-yard gain and fresh set of downs. Zellmer then rushed for eight yards to set up second-and-goal from the one-yard line and two players later, Zellmer scored with 28.2 seconds left.

The Panthers began their final drive from their own 30-yard line and gained nine yards on four pass attempts to end the game.

Blossoms head coach Chad Gimbel said the team’s character showed at the end of the game.

“We won, but it wasn’t a pretty game,” Gimbel said. “When things are going well, it’s easy to stick together. When things go south, that’s when you see your true character and we put together a good drive at the end, with most of it coming on the ground.”

The Blossoms’ Zellmer, a senior, finished the game with three touchdown passes and moved with 21 of tying the state record for most passing touchdowns in a career.