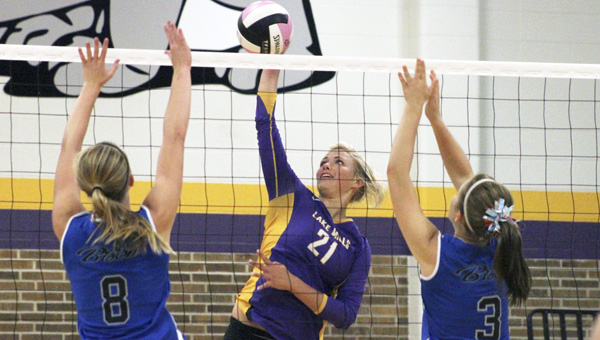 LAKE MILLS, Iowa — When practice opened for the Lake Mill Bulldogs back on Aug. 8, head coach Jim Boehmer thought the potential existed for his team to win its first 16 matches.

Five weeks later, not only are his Bulldogs a stout 16-0 but they have yet to drop a single game.

After Tuesday night’s victory over the North Iowa Bison, Lake Mills extended its winning streak to 37 games. The Bulldogs handled the Bison 25-7, 25-17 and 25-13.

“I think the potential was there,” Boehmer said. “We felt everyone on our schedule is someone we could beat.”

Senior Josie Brackey helped lead the way for the Bulldogs with 10 kills, 10 digs and two blocks. Morgan Fjelstad had three kills, 27 assists and four digs in the winning effort.

Lake Mills started off strong in the first game opening up to a 12-4 lead early. After winning a point, the Bison couldn’t find an answer for the Bulldogs’ offense as they were able to rattle off 12 straight points and then close out the set 25-7.

“I thought we started well, which is what we try to stress — getting out of the shoot,” Boehmer said.

North Iowa came back hungry in the second game and hung around all set. The Bison beat Lake Mills to the fifth point but after that it was the Bulldogs leading the way. After Lake Mills scored five straight points, the Bison were back at it again.

They exchanged points with the Bulldogs, but the point spread was already too much to overcome as the third ranked team in the state closed out the scoring at 25-17.

In the third game, Lake Mills returned back to the form that netted them the No. 3 ranking in the state of Iowa and soared out to a 7-1 lead before closing out the match 25-13.

Boehmer doesn’t think the high ranking affects the girls too much on the court, but they do enjoy having the recognition.

“I think they feel good about it but they’re not really thinking about it,” he said. “We’re glad to have it and we want to keep winning.”